Pavlysh gets life ban for doping

Pavlysh, 35, failed the drug test at this year's world indoor championships in Budapest after easily winning her event. 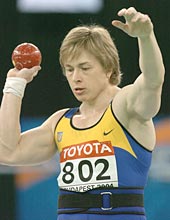 "We have decided to ban her for life because it was her second offence," said a spokesman for the Ukrainian Athletic Federation. "Enough is

Pavlysh served a two-year ban in 2001 after testing positive for stanozolol at the 1999 world indoor championships in Maebashi, Japan, where she also finished first.

She also won the world indoor title in 1997 and was twice a European champion.

Pavlysh is the second world indoor champion to test positive for stanozolol.

Russia's Anastasiya Kapachinskaya, who won the 200 metres in Budapest, was banned for two years by the country's athletic federation last week.

© Copyright 2020 Reuters Limited. All rights reserved. Republication or redistribution of Reuters content, including by framing or similar means, is expressly prohibited without the prior written consent of Reuters. Reuters shall not be liable for any errors or delays in the content, or for any actions taken in reliance thereon.
SHARE THIS STORYCOMMENT
Print this article

Indian delegate at UNGA walks out amid Imran's address

'I am not blaming Anushka'