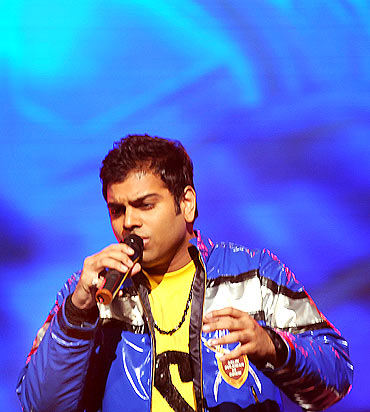 In our special year-end section, Rediff.com looks at people who wrote the India story in 2010.

Sreeram Chandra was the Indian Idol 2010. Trained as an engineer, he hopes to become a well known and well loved singer.

Patcy N met the talented Sreeram who has already tasted the first notes of success.

The cheerful winner of Indian Idol 2010 seems to have hit the high note -- he is the only Idol after Abhijeet Sawant, the winner of the first season, who has seen a fair amount of success after winning the title.

"Life was very normal before and after Indian Idol," he says, "Everybody struggles before achieving something, I did too and it is the same even after winning the title. The only difference is that I have an identity now."

The Hyderabad lad feels the Indian Idol platform has given him recognition as a singer, but the struggle is far from over because his career has just begun and there is a long way to go.

The road to music 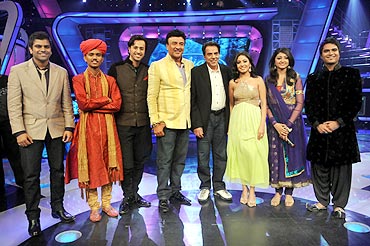 Image: Sreeram, left, with Bollywood legend Dharmendra, judges of the show, and other contestants

Sreeram was introduced to music by his grandfather, an avid music listener. It was he who discovered Sreeram's singing talent. Though he had no formal training in music, Sreeram started participating in singing competitions while in school.

After his Class 10, music almost vanished from his life. He went away to boarding school and was immersed in his studies. It was only after two years when he came back home to join an electrical engineering course, he began learning Carnatic music and simultaneously did engineering and Carantic music for five years.

"In the first year of engineering, I told my parents that it was not my cup of tea and I wanted to pursue music," he says.

"My parents were very supportive. They allowed me to do stage performances. Their only clause was that I should finish engineering so that if I don't do well in music, I would have an education to fall back on. Their worries were genuine, so I completed engineering."

Born and brought up in Hyderabad, Sreeram's father M S N Prasad is an advocate in the high court; his mother Jayalakshmi is a homemaker. His younger sister Ashwini is in her second year BA.

Before winning the Indian Idol competition, Sreeram had already won two Telugu reality shows -- Okkare and Ananda Ragam -- which provided him an entry into the Telugu film industry.

The Indian Idol contest had become a mission

Sreeram knew the Indian Idol contest would be the biggest platform to showcase his talent. He auditioned and was selected in the first attempt.

Once he was selected he had to convince his parents. "They had some doubts. They were not sure where I was heading. I am not from a musical family and they did not know much about this contest, so they cautioned me," he says.

"Once I was selected they were glad and from then on it became easy for me because I had their support."

Sreeram stayed in Mumbai for the duration of the contest and was determined to only return home after he had achieved what he had set out to do. It was a chance he had waited for all these years and he wanted to make a career of his singing talent.

The Indian Idol contest, for him, had become a mission.

"I would take every episode very seriously. I knew the whole of India was watching me. I was very focused and that helped me to be consistent and versatile."

'After Indian Idol, life has changed for good' 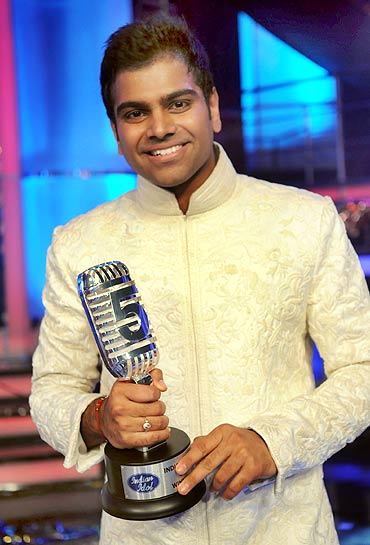 Image: Sreeram has sung for The Chronicles of Narnia: The Voyage of the Dawn Treader

There were times that Sreeram felt he wouldn't win, that others were better than him, but he wanted to give it his all.

"Winning or losing was not my point, my point was that the whole of India should know my talent and I should be on the stage as a good singer."

"After Indian Idol, life has changed for good and it is definitely not a small change because I got to sing for The Chronicles of Narnia: The Voyage of the Dawn Trader -- and that is not small. If it was not for Indian Idol I would have never got Narnia."

Other opportunities came knocking -- his first concert was an international one, held in Germany where he was the only singer representing India at a show organised by the Bertelsmann Music Group celebrating its 175th anniversary.

He was also part of the Commonwealth Games closing ceremony in New Delhi where he performed with leading Indian musicians. His song in Narnia was recorded in three languages: Hindi, Tamil and Telugu.

Fox Star Studios, the producers of Narnia heard his album Rehnuma, released by Sony Music and wanted to use the title track in the film. But they wanted him to sing in Tamil and Telugu too.

"Rehnuma means mentor and Aslan the lion is the mentor for the kids who helps them solve all hurdles. That's why Fox Star Studios thought of picking that song," he explains.

'I am open to all kinds of music and any genre'

Of his Indian Idol fellow contestants, he remains in touch with Rakesh Maini, Bhoomi Trivedi and Shivam Pathak. They perform at concerts and share a healthy relationship.

He regrets that he does not get enough time with his family. "I feel this is a kind of a job where you can't be in one place for more than two days so my parents understand my point, but we try to spend quality time together."

Sreeram says he would like to work with different composers. "I never limited myself to anything in life. I am open to all kinds of music and any genre."

Face of the Future 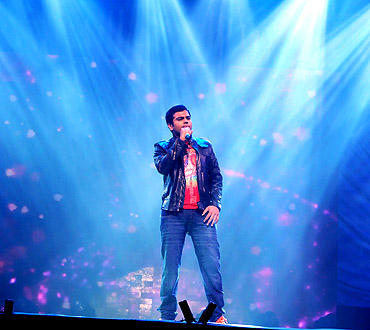 "I didn't get the bulk amount of the prize money," he says, "That takes some time as it comes in intervals. After deducting tax, it is divided into eight instalments that I get it over two years time, every three months."

He is thrilled to have won three motorcycles during the course of the show. "I got one. The other two I have not got as yet, but I am thinking of exchanging them for a sports bike," he grins.