An attacker drove a car along a pavement in Westminster, stabbed a policeman and was shot dead by police in the grounds of Parliament. 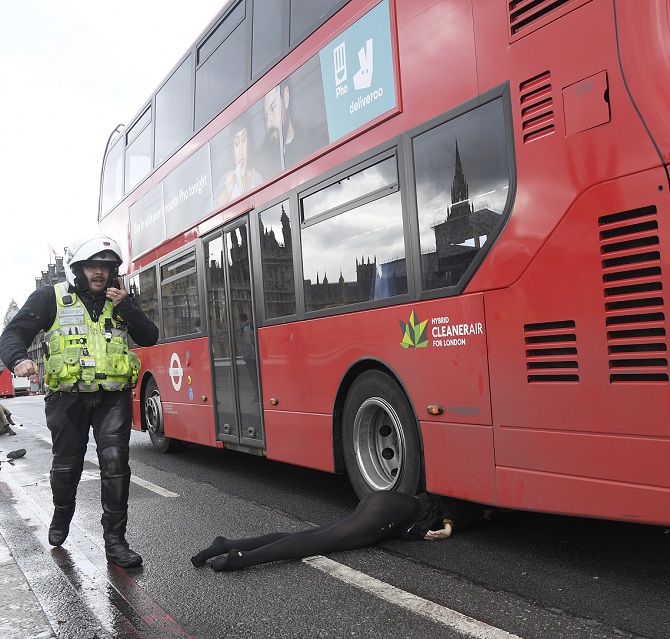 Five people were killed and 40 others injured when a terrorist suspect mowed down pedestrians on a bridge and stabbed a police officer outside parliament complex before being shot dead by Scotland Yard officers in an incident inspired by “international terrorism”.

The knife-man behind the attack in the heart of London was shot dead by armed Scotland Yard officers.

The Metropolitan Police named the police officer killed as 48-year-old Keith Palmer and also confirmed that the attacker was “known” to the police.

“I can also now confirm three members of the public also lost their lives in this attack. And I confirmed earlier, the suspected attacker was shot dead by an armed officer - therefore meaning we now have five people in total who have died, said Mark Rowley, national lead for Counter Terrorism Policing and the Acting Deputy Commissioner.

“I will not comment at this stage on the identity of the attacker, but our working assumption that he was inspired by international terrorism,” Rowley said.

“Also, at this stage, but it may change -- we believe approximately 40 people were injured, some with serious injuries, including three police officers, two of whom are in a serious condition,” he said. 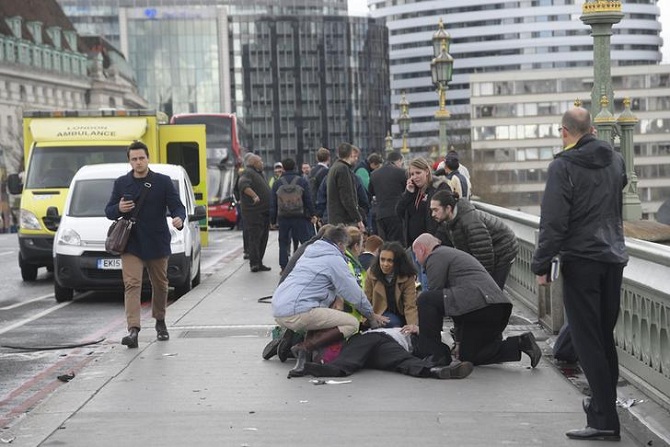 British Prime Minister Theresa May condemned the terror strike as “sick and depraved” attack on democratic values, which was “doomed to failure”.

May also paid tributes to the “exceptional men and women” of the police force who responded to the attack.

“We will all move forward together, never giving in to terror and never allowing the voices of hate and evil to drive us apart,” she said.

Scotland Yard had earlier called on the public to “remain vigilant” and said a review of policing strategy across the city was underway, with additional police officers being deployed across London.

The Indian high commission in London has set up a special “Public Response Unit” for any Indians caught up in the terror attack. 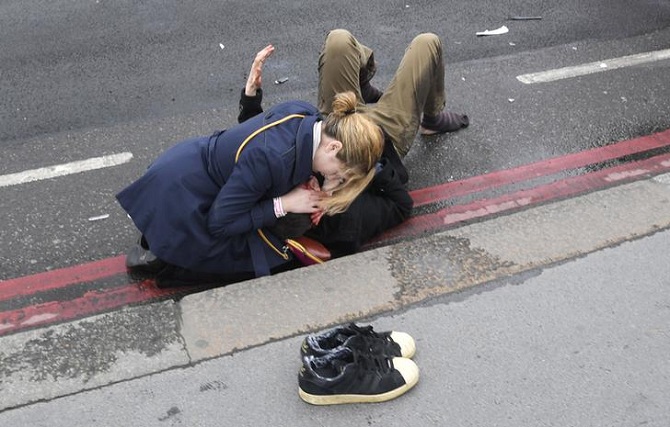 The incident unfolded on Wednesday afternoon as a man tried to gain entry into the British Parliament via the main entrance and stabbed a police officer. Plainclothes armed officers shouted warnings at him before shooting a number of rounds. He was later seen being covered by blankets, presumed dead.

In an incident just minutes earlier, a speeding grey Hyundai i40 mowed down several pedestrians on Westminster Bridge nearby before ramming into the iron railings of the side of the House of Commons building.

The driver of this vehicle then ran out of the vehicle to try and enter the Parliament building, where he attacked the police officer and was eventually shot dead.

Dozens of injured people were rushed to hospital from the scene and one woman was confirmed dead by doctors at St Thomas Hospital near Parliament hours later.

“We are working closely with other members of the emergency services at the scene, with our priority being to ensure patients receive the medical help they need as quickly as possible,” London Ambulance said in a statement. 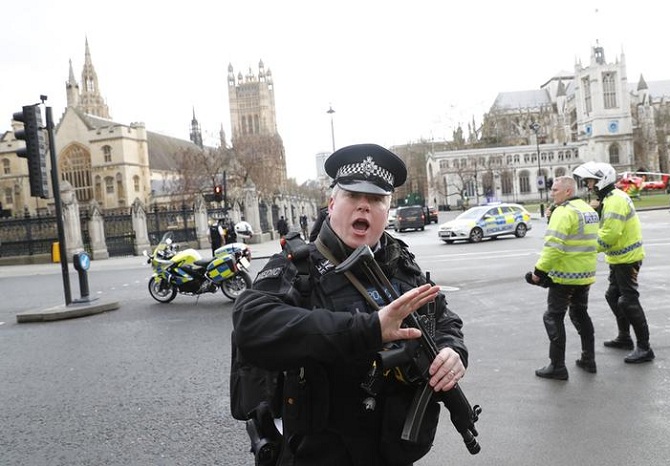 French Prime Minister Bernard Cazeneuve said French school pupils are among the injured and offered “solidarity with our British friends, and full support” for the wounded students and their families.

Commons Leader David Lidington, who suspended the Parliament session as this unfolded outside, told MPs the “alleged assailant was shot by armed police”.

“It seems that a police officer has been stabbed, that the alleged assailant was shot by armed police. An air ambulance is currently attending the scene to remove the casualties,” Lidington said.

“There are also reports of further violent incidents in the vicinity of the Palace of Westminster but I hope colleagues on all sides will appreciate that it’d be wrong of me to go into further details until we have confirmation from the police and from the House security authorities about what is going on,” he added.

Witnesses said the attacker was shot by police as he approached a second officer clutching his knife during the incident. 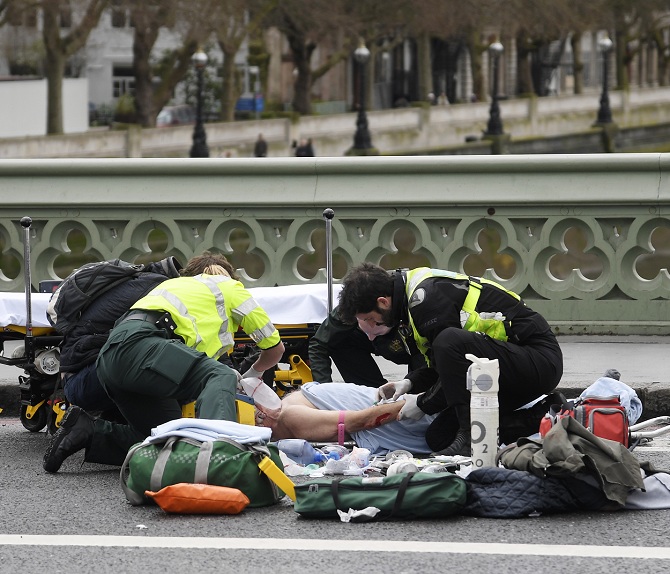 May, who had just completed her weekly prime minister’s questions, was seen being ushered into a car as gunfire rang out at Parliament during the incident.

Downing Street said the PM was “safe” as an emergency services helicopter was seen landing in Parliament Square, which has been cordoned off and closed to traffic.

“The Prime Minister was brought back to Number 10 from Parliament. She is currently monitoring the situation,” a Downing Street spokesperson said.

May chaired a meeting of the government’s emergency Cobra committee at Downing Street. 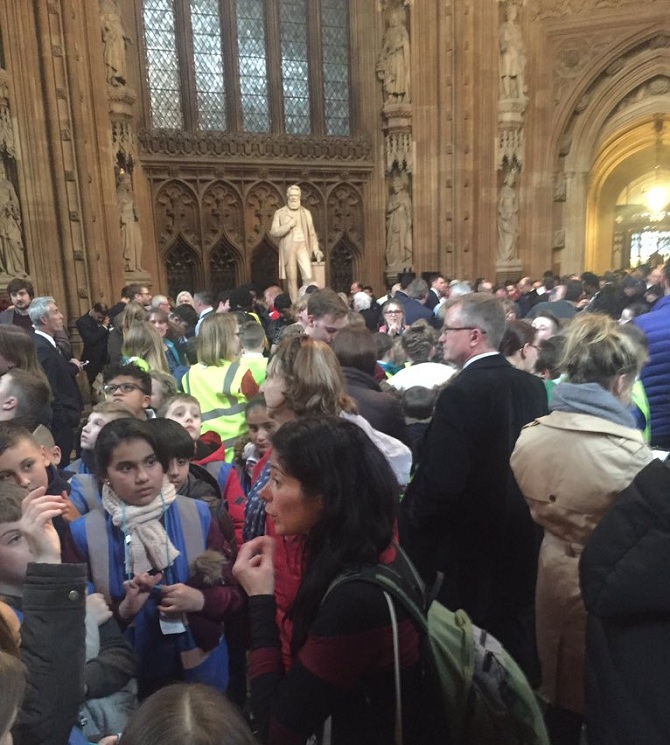 IMAGE: Michelle Langan, a writer caught in the Parliament lockdown, tweeted this photograph from inside, saying, "Locked in the cafe at the Houses of Parliament as someone has a weapon outside.'. Photograph: @Liverpoolshell/Twitter.

MPs and peers were in lockdown inside the Parliament building for an extended period before being walked down across the road to Westminster Abbey.

Workers and members of public in buildings in surrounding areas were also held up behind the cordoned off area. A number of schoolchildren were also held back until the police cordon was lifted. Tourists on the famous London Eye attraction were among those trapped in the pods as part of the lockdown.

There was chaos in the area as people were seen running and being pushed back by Scotland Yard officers.

“Our thoughts are with the victims of this horrific attack, (their) families and friends. The police and security staff have taken swift action to ensure the safety of the public, MPs and staff, and we are grateful to them.” 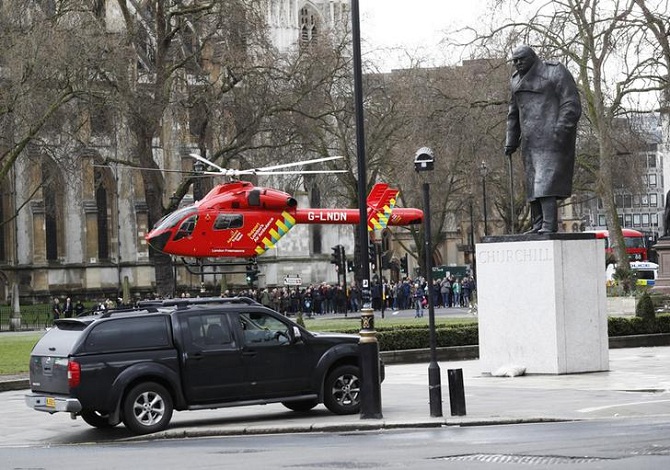 London Mayor Sadiq Khan said his thoughts were with those affected and expressed his gratitude to the city’s police and emergency services who “work so hard to keep us safe and show tremendous bravery in exceptionally difficult circumstances”. 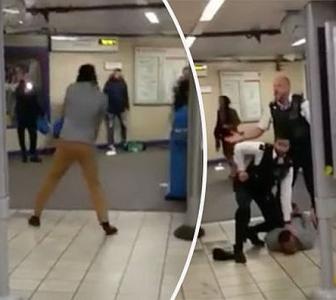 Attacker screaming 'this is for Syria' stabs 3 in London station Terror ploughs into France once again; 10 kids among 84 killed 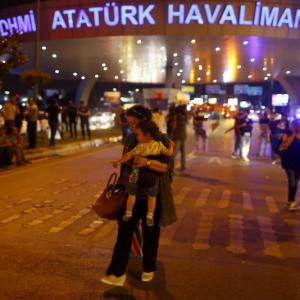 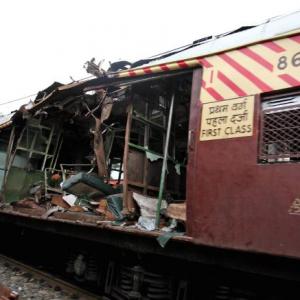 Terror on the tracks: A deadly history of attacks on trains