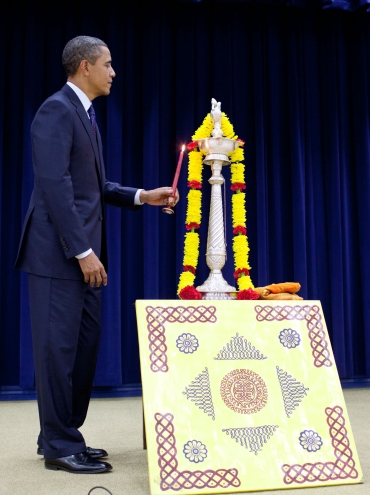 United States President Barack Obama celebrated Diwali at the White House complex by lighting the traditional diya and hosting a reception for eminent Indian Americans and officials in his administration. "Diwali is a special holiday for millions across the country", Obama said in his address to the gathering of Hindu Americans in Washington on Saturday night.

"Michelle and I greatly enjoy the occasion and the celebration in India last year," Obama said recollecting the dancing of the First Lady at the Diwali festival in Mumbai last year, which he too joined.

"Diwali is the time to celebrate victory of light over darkness, hope over despair. Hindus, Sikhs, Jains and Buddhists consider the day sacred. The message of this day is truly universal," Obama said at the event that was closed for the press.

Among those present on the occasion were the Indian Ambassador to the US Nirupama Rao; Neera Tandaon, the new president of the Center for American Progress, eminent Hindu American Anju Bhargava, USAID Administrator Raj Shah, the US Ambassador to Belize Vinai Thummalapally, Hindu chaplain Pratima Dhar and a Sikh delegation from the Golden Temple.

In his remarks, Obama acknowledged the contributions of the Indian American community in every field of the country from New York Taxi drivers to the teenager, who won the Google science fair this year.

Two years ago, Obama became the first US president to celebrated Diwali at the White House.

On that day, he established the President's Advisory Committee on Asian Americans and Pacific Islanders, which is headed by Kiran Ahuja, who according to the president is doing an outstanding work.

Speaking on the occasion, Anju Bhargava of Hindu American Seva Charities emphasised the need to light the lamp of service.

"Today we can proudly state that Diwali lights community building in our county and beyond," she said.

"In the first Hindu seva conference held at the White House this summer, they helped recognise us as Hindu-Americans, an identity created in the spirit of the American tradition. This historic event highlighted the needs of the community, and offered the potential for vast service opportunities for Hindus to engage in all across America," she said.

"It also highlighted the importance of interfaith cooperation in today's  America," she added.

Source: PTI© Copyright 2021 PTI. All rights reserved. Republication or redistribution of PTI content, including by framing or similar means, is expressly prohibited without the prior written consent.
SHARE THIS STORY
Print this article
Ramesh rejects Mayawati charge, says Cong states under scanner 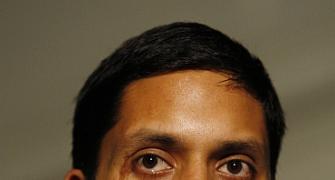 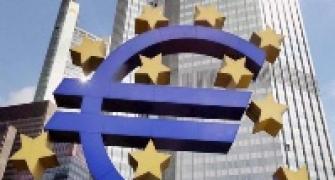 How Shah Rukh got married to Gauri 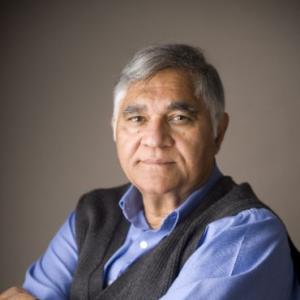