The Delhi high court on Wednesday expressed its unhappiness with the Centre over the non-supply of the full oxygen quota allocated to the national capital and objected to a "change" in Covid treatment protocol on Remdesivir use, saying "it appears you want people to die". 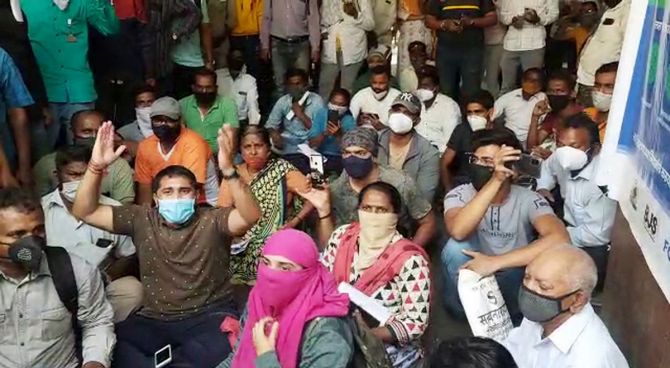 IMAGE: People stage a protest in Pune over the shortage of Remdesivir. Photograph: ANI Photo.

"This is wrong. This is a complete non-application of mind. Now people who do not have oxygen will not get Remdesivir either," Justice Prathiba M Singh said when the central government submitted that under the Covid treatment protocol being followed now only patients on oxygen support were being given Remdesivir.

"It appears you want people to die," the judge said.

Noting that the nation is facing an unprecedented crisis, the court also appealed to citizens and suppliers not to hoard oxygen cylinders and medicines to avoid creating an artificial shortage.

“The allocation made by the Centre to Delhi is 490 metric tonnes per day. Not for a single day, has Delhi been able to get the complete quantity,” a bench of justices Vipin Sanghi and Rekha Palli said, adding that this is primarily because three of the plants are situated in West Bengal and Odisha which are at a distance of 1300-1500 km from here.

Justice Singh also said the court will consider later whether a medical committee should review if the protocols or guidelines for administering Remdesivir need any modification.

"Don't change the protocol only to reduce the shortage. That is wrong. As a result, doctors are not able to prescribe Remdesivir," the court said and added, "This is complete mismanagement."

The bench headed by Justice Sanghi appointed senior advocate Raj Shekhar Rao as amicus curiae to assist the court in dealing with the medical oxygen crisis and other issues related to the Covid-19 pandemic.

It asked him to study the national allocation order on oxygen and give suggestions on optimal usage of tankers and minimisation of turn-around time.

It also asked the Delhi government to place a report on the number of RT-PCR tests conducted in the last seven days and the reasons for the reduction in the tests.

The court was informed that at the time of discharge of Covid-19 patients from hospitals, the process of a no-objection certificate by Third Party Administrators (TPA), attached to insurance companies, is taking a long time of 7-8 hours resulting in a delay in discharge and admission of new patients.

The court said such delays are bound to result in more sufferings for patients and their attendants and directed the insurance companies and their TPAs to ensure that the time take to grant NOCs is reduced so that such a problem does not arise.

The bench also asked the Delhi government to examine the suggestion by senior advocate Krishnan Venugopal for taking the services of armed forces in this situation as they can set up field hospitals which will help a large number of Covid-19 patients in the national capital, and take appropriate steps.

Venugopal said that there is a large section of medical practitioners, who on account of the pandemic, are confined to their homes and there is a huge number of Covid-19 patients who do not get immediate medical advice and treatment and the delay results in complications.

He suggested that the medical officers, who voluntarily offer their services, can be contacted through a centralised system and the patients can consult them.

The bench said his suggestion was worth consideration and directed the Centre and the Delhi government to examine the same and file replies.

Another issue was raised that a large number of ambulances are carrying bodies of Covid-19 patients to crematoriums and due to the long queue, it takes time to complete the journey and the vehicles can't be used for ferrying patients to hospitals.

The court asked the Delhi government to consider the suggestion that old DTC buses be used to carry bodies to crematoriums and file its reply in two days.

It also asked the government to consider the suggestion of senior advocate G Tushar Rao that mohalla clinics be used for providing immediate consultation and treatment to Covid-19 patients and also for the collection of test samples.

The court was also informed that in pursuance of its Tuesday's direction, the Delhi government has issued orders relating to the allocation of medical oxygen to hospitals taking into account the requirement for ICU beds and other oxygen beds.

It noted that the government's order mentions the names of oxygen refiller units that would supply the gas cylinders to the hospitals in Delhi and directed the state to implement it forthwith.

Following a court's order, some of the refillers were present in the hearing and assured the bench that they will comply with the government's order in letter and spirit and also made some suggestions to streamline the supplies to hospitals and individuals.

One of the suggestions was that few refillers can cater to the needs of oxygen cylinders by individuals who are being treated for Covid-19 at homes and the others can supply to hospitals.

The court said that a meeting should be conducted between Delhi government officers and refillers on the issue on Wednesday evening and in the meantime, the state shall provide cylinders to individuals.

The court appealed to citizens not to hoard oxygen cylinders and medicines required for Covid-19 patients to avoid creating artificial scarcity and make them available to people in need.

“The nation is facing an unprecedented crisis. It is in times like these that we the people need to stand up and showcase our qualities and virtues which all of us have. We appeal to the good sense of people not to resort to black marketing and hoarding of oxygen cylinders, flow meters or medicines and to make them available to the needy.

“Hoarding of medicines or oxygen leads to artificial scarcity to an extent which may not be safe,” the bench said.

Earlier in the hearing, the court observed, “All refillers, our understanding is that they are hoarding and selling oxygen cylinders in black. We will do something about it.”

To this, some of the refillers assured the court that there was no hoarding at their end and none of the plants was indulging in black marketing.

“Aapke parivar ko sabki dua lagegi (your family will be blessed by everyone). We don't want to take any strict action against anyone. So you all comply with the government's order on refillers,” the bench said.

'So many deaths are happening all around you'

'When the deadly second wave came, Modi got exposed'