By Prasanna D Zore
August 23, 2012 20:54 IST
Veteran journalist Kanchan Gupta woke up on Thursday morning to find that his Twitter account (@KanchanGupta) had been blocked. With about 25,319 followers "who listen to what I have to say" on the microblogging site. Gupta, who by his own admission, has been writing against the Congress party, Prime Minister Manmohan Singh and the United Progressive Alliance II, was shocked to find out that his account was inaccessible.

Are you sure your Twitter account has been blocked by the UPA government and it is not a case of hacking?

Yes, it has been blocked by the government.

How did you come to know that your account had been blocked by the government?

What they (the government) have done is they have asked the Internet service providers to block my (Twitter) handle. So in many places it (the blockade) is already in place. I am told there is a server crawl time, so it takes some time to put a block (on my Twitter handle) across the country.

This is what I understand, but I don't know.

At many places if you try to access my Twitter handle it says blocked by court orders and instructions from the DoT (department of telecommunications).

I compare this blockade to the 1975 Emergency.

Do you think we are moving towards a 1975-like situation as far as Internet freedom is concerned?

See, the information technology secretary goes on television and says the list was prepared by the security agencies. I am 51 years old all my life -- 30 years of my professional life -- has been for this country. I have been a journalist but I have never worked or written against our national interest.

At this age, to being told that I am being suspected of being a security threat to the country is either laughable or it is a slur on me. In our country you cannot prosecute the State, otherwise I would have prosecuted the State.

How do you plan to get your account active again?

I will see how it plays out. I haven't yet taken a call on that yet.

Do you think this is personal vendetta?

This is political vendetta.

Why would you say that?

I have been consistent in my criticism of the Congress, the PM and this particular government. And I have a sizeable number of people who listen to what I have to say and that is what the government wanted to prevent. This is a political decision and that is why I call it a political vendetta.

And it has got nothing to do with you being a national security threat?

That is an absurd proposition.

Has the government singled out only Kanchan Gupta?

Is he also a vocal critic of the present government?

Are you planning to take any concerted action to get this blocking of your Twitter accounts removed? Maybe, petition the government?

Why should I petition the government? A petitioner is a weak person who goes and petitions. I have never petitioned (anyone) in my life.

Do you expect the government to remove the block anytime soon?

How can I say that? It is for those who made this political decision to decide.

Any particular person from the Congress who you think could have initiated this block? 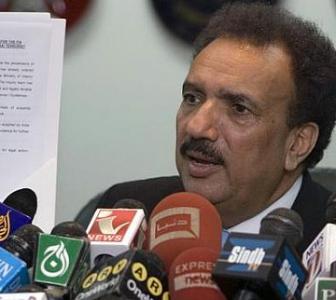 Give us proof and see how we act: Malik on allegations