Saisuresh Sivaswamy, who was in New York on 9/11, relives the day that changed America and the world.

The plaintive wail of a woman rang through the train compartment as we were hurtling through the conurbations dotting New Jersey and New York, but none of us in that peak hour rush on that September morning, I daresay, realised what was actually happening.

In the distant horizon we could see the Twin Towers -- my last sight of the world's tallest buildings till then, seared into my soul for eternity -- and was that a wisp of smoke towards the top of it or was it mere will-o'-the-wisp playing games with one's eyesight, and distant memory now? I couldn't be too sure, as I pressed myself against huge bodies lining the glass windows, all eager to catch a glimpse of what had happened.

'I swear, I saw the plane fly into the Towers,' somewhere upfront the woman kept up her wail. 'F***, it was a plane, my god!'

A plane? Flying into the Twin Towers? The idea seemed so fantastic that it was dismissed out of hand by most in the compartment. And me, barely four months in the United States of America -- my longest stay till then -- had already bought into the superpower's disbelief that their land could ever be attacked.

I don't think anyone in that compartment heading to work on what seemed just another, normal, balmy morning, thought it would be a terror attack, that some twisted minds from thousands of miles away harbouring hatred for what the US of A stood for would actually undertake a covert operation using the very freedoms they abhorred so much to bring the country to its knees.

Now a plane flying into the towering structures was not such an impossibility as it seems. It had happened earlier, to the previous record-holder for the world's tallest structure, when a military aircraft had flown into the Empire State Building. So yes, it has happened again, with the Twin Towers. 'These guys should really learn how to fly,' a wag remarked, drawing titters from the rest.

Till that day, every time I visited New York City I was impressed by the amount of freedoms that was visible all around.

For me, coming from the land that till then seemed like terrorists' favourite playing ground, the security restrictions had become an intrinsic part of life.

Heck, as recently as four months earlier, when the family saw me off at Mumbai airport, the goodbyes were said on the road outside the terminal, among honking vehicles emitting smoke and other passengers wheeling their bulky trolleys. They continue to be said in similar fashion in our airports.

In contrast, when I saw off my colleague at JFK, I walked with him till the boarding gate, hung around well after the plane left, the marvel of it refusing to leave me even now, a decade later.

That, I realised, was freedom. That, I now know, was freedom from fear. The world's sole superpower had little to fear till then, and I had gotten carried away by that attitude too.

It was not just external fearlessness, it was internal as well.

When I was browsing through a merchandise store off Broadway, looking for knickknacks to take back home for family and friends, I was startled to find one item on the shelves. Toilet paper.

Nothing unusual about it, the tissue after all is as inherent to American lavatorial custom as water is to ours, but this one was different, which was why it featured in that store.

It was a stars and stripes toilet paper.

Now everyone knows that Americans wear their flag on their sleeve, along with their heart. But for poor me, coming from a land where the Tricolour is an object of veneration and awe, this was simply too much to bear. I gingerly approached the shopkeeper and asked him if it was okay to sell such an item, won't there be, errr, trouble?

I got my answer from his quizzical expression. I realised this was complete freedom, from fear of any kind.

Every time I would see someone off at JFK, I was amazed by the freedom to just saunter all over the structure. Ah, but these guys have never been hit by terrorism, let it happen to them, then we will see what they do. No, this was not a wish, as a citizen of another liberal democracy one loved America too much to wish them bad; you can call that piece of rhetoric a dismal justification for the way we think.

As the announcer's voice cut through the clamour in the train compartment that 11th day of September 2001, never once did it cross my mind that the T-word had crossed the Atlantic.

The train we were on would not reach its terminus, Penn station in New York City, but cease its journey at Metro Park (or was it Elizabeth?), where the National Guard would board the train. We were told to alight peacefully and follow orders.

We knew something was wrong, but just what? It was not yet 10 am. Cell phones, that marvel of the 21st century, were fished out all across, and the result was virtually the same. No network. Was it jammed by an edgy administration, or was it a case of overload? No one knew, but everyone was worried.

The order in the midst of what was a chaotic situation was the most amazing thing I saw around me that day. As trains disgorged hundreds of commuters on the platforms, there was no shoveling and jostling, which is what I am accustomed to in my long years in India's commuter capital, Mumbai. Here all of us trooped out in line, with the overhead announcer telling us to come out of the station, take a taxi and head home.

No one can enter the city.

But, but, I had an edition to attend to, it was deadline time and the newspaper had to be sent to the printing press.

If all men suffer from the delusion that their job is a world-saving one, journalists are the terminal case. And I was on deathbed.

I approached a National Guard soldier, fished out my worthless press identity (issued in India) for what it was worth and told him I needed to get to Manhattan, I had a job to do, you see.

He heard me out, I will grant him that much, but little else.

As I saw happy hordes hailing cabs and speeding home, liberated from the thought of suffering another workday, I decided to hang around. Whatever had happened would pass soon, once they realised that it was a flying accident and lift the restrictions. I had a job to do, for Chrissake, besides, what would I do by myself in my sad house in Edison, New Jersey! It was just about 10 am, and Chinese whispers had brought the news that it was a terror attack.

I hung around, past 11, 12, and 1 pm. If the National Guard fellow was bugged by my entreaties to be let into New York City every half hour or so, he didn't show it, even though I could see they were all tense as hell. There was no sign of the cell phone network reviving either, and I wondered what my colleagues and family back in India were thinking. That I had overslept and missed the action, or that I was caught in the mess somewhere?

Finally, I decided to call it a day and head back home in the afternoon. As I switched on the television and realised the enormity of 9/11, I sunk into disbelief and despair.

A few weeks later, as I flew back to India, my friend who dropped me off at JFK saw me off at the passenger drop area outside the terminal, thanks to the security restrictions. As I made my way through the grim, and new, security checks, I was reminded of home.

September 11, I realised, had changed America forever. And with it, alas, the world. 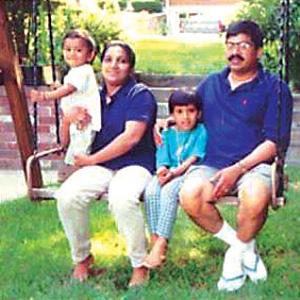 'I forgive Osama. He's in God's hands to punish' 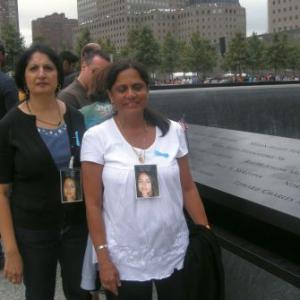