Such criticism by China of a foreign government official, particularly of a major power like the US, is very unusual.
It is clear that China will come under increasing pressure certainly till the US pesidential elections are held, observes former senior RA&W officer and China expert Jayadeva Ranade. 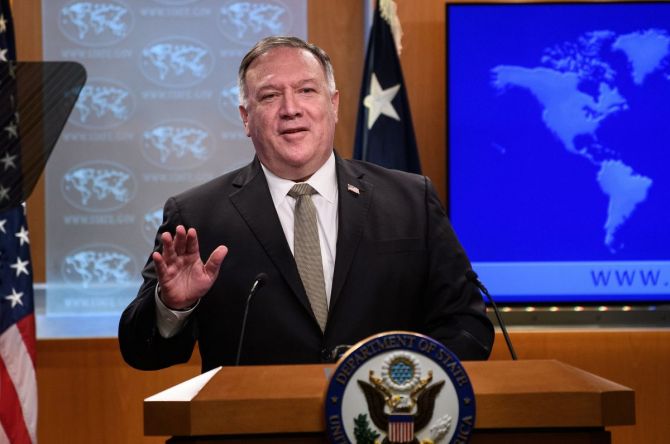 IMAGE: US Secretary of State Mike Pompeo speaks at a news conference at the State Department in Washington, DC, September 2, 2020. Photograph: Nicholas Kamm/Reuters

There is an excellent song by Frank Sinatra called I've got you under my skin! China's leadership seems to feel just that way about US Secretary of State Mike Pompeo.

His comments, especially those aimed at the Chinese Communist party, have rattled the cage!

Pointed remarks by senior US officials, especially Pompeo, about China's Communist ideology being a threat and the US sanctions targeting specific Chinese Communist party officials involved in formulating, or implementing, harsh repressive policies against the Uyghur minority in the Xinjiang-Uyghur Autonomous Region or Hongkong, are aimed at the Communist party.

It particularly renders vulnerable those party members with assets illegally stashed in the US or abroad, or have close relatives studying there.

More worrying for Communist party members is the possibility that they -- and maybe their families -- will be banned from getting US visas.

Almost 70 per cent of Communist party members at and above the department level have their children studying in the US!

Exhibiting the concern and worry in China's leadership echelons, the Communist party's People's Daily on August 25, published a lengthy, three full-page 34,000- character (Chinese) article that listed a barrage of criticisms against Pompeo.

It was a response to his speech on July 23, 2020, at the Richard Nixon presidential library in California.

The article contained a point-by-point rebuttal of 26 statements selected from Pompeo's speech.

To facilitate international dissemination the English-language China Daily (August 28 - September 3, 2020) reproduced the Xinhua report, which was the basis for the People's Daily article, under the caption 'Fact check on Pompeo's speech'.

It accused Pompeo of spreading the 'China Threat Theory' in an attempt to forge an international anti-China alliance and contain China's development.

Charging that Pompeo's remarks ignored 'history and reality, are full of strong ideological prejudice and a Cold War mentality', it affirmed that the Chinese people had condemned Pompeo's remarks and that 'rational people' in the US and the international community had also criticised them. 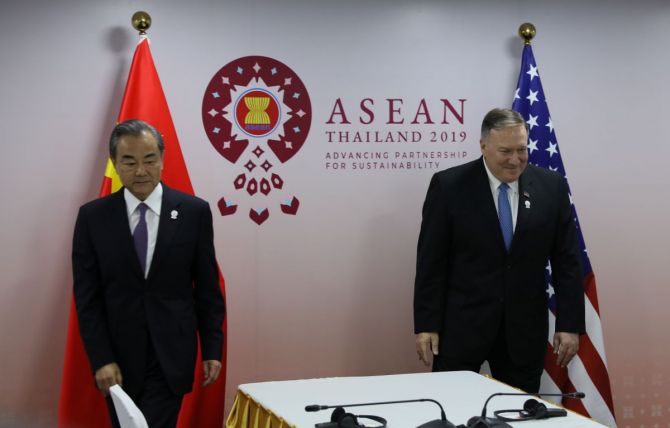 Of interest are the first two points in the People's Daily article.

It represents 'the fundamental interests of the most people in China'; everything is for the people, the people are supreme in everything; and the CCP has led the Chinese people to win independence, freedom and liberation, and made great achievements in the development of the country.

The second point affirmed that the people are the foundation of the Communist party and are its blood.

The Communist party is the 'choice of history and the people'.

It highlighted that in the 99 years since its founding, the party had grown from around 50 to 91.914 million party members by the end of 2019 and is now the world's largest party that 'has long been in power in the world's most populous country'.

'Without the Communist party, there would be no new China' is the common belief of the Chinese people.

Trusting the Communist party of China is the mainstream public opinion in China.

China's Guangming Daily on August 31 published an article under the caption 'Why 'Worst Secretary of State in American History' Gets Its Name', which referred to a recent Washington Post article.

It enumerated that he had ignored the severity of the epidemic, evaded his own political responsibility, refused international cooperation, and tried to 'throw away' China, etc.

It ended with the observation that 'since the end of World War II' perhaps 'no one has performed worse than Pompeo'.

Notwithstanding this sharp personal criticism, US pressure on China continues.

A statement issued by the US Department of State on September 2, 2020, mandates that henceforth senior Chinese diplomats in the United States will need approval to visit university campuses and meet local government officials.

Cultural events with an audience larger than 50 people hosted by the Chinese embassy and consular posts outside of mission properties will also require approval.

The statement added that action will be taken to ensure that all official Chinese embassy and consular social media accounts are properly identified as Chinese government accounts.

The announcement that Confucius Institutes will be shut down by the year's end will have a major impact on China's propaganda and 'influence operations'!

On September 1, Pompeo accused the Chinese-government funded Confucius Institutes of working to recruit 'spies and collaborators' at US colleges.

'I'm hopeful we will get them all closed out before the end of this year,' the US secretary of state said.

In August, Pompeo had labelled the centre that manages the Confucius Institutes in the US as 'an entity advancing Beijing's global propaganda and malign influence' and required it to register as a foreign mission.

This will be a major blow to China which has spent $2.17 billion on the Confucius Institutes between 2006 and 2016.

According to the Confucius Institute's annual development report 2017, these institutes processed more than 1.7 million students and 621,000 registered online students by 2017.

Such criticism by China of a foreign government official, particularly of a major power like the US, is very unusual.

However it is clear that China will come under increasing pressure certainly till the US presidential elections are held.

How will Biden deal with China?

China is striking back and HOW

We can't depend on the US to fight China

Is Modi ready for Trump's exit?

Opinion: Why US wants India-China conflict to simmer