'Imran Khan would only have spoken with the full awareness of Modi's complex political personality.'
'He has the great advantage of being privy to the confidential exchanges between then Pakistan prime minister Nawaz Sharif and Modi during the latter's celebrated surprise visit to Lahore in December 2015 as well as the 'back channel' conversations between the national security advisors of the two countries,' says Ambassador M K Bhadrakumar. 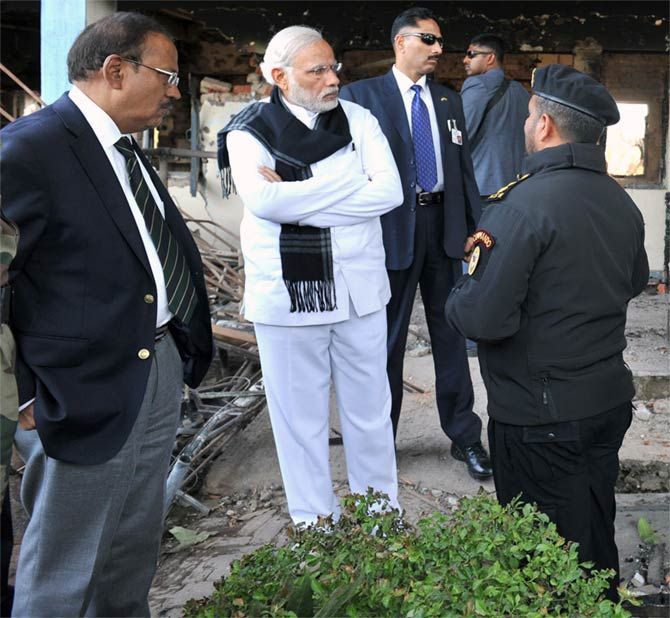 Doublespeak is commonplace in statecraft.

A celebrated case is of then US president Barack Obama who was facing re-election in 2012. Battered by criticism by his Republican contender Mitt Romney for being 'soft' on Russia, Obama sought a private understanding with the Kremlin leadership that he couldn't afford to be seen by the American public as flexible on relations with Russia until the presidential election that year got over.

Obama and his interlocutor then Russian president Dmitry Medvedev were unaware that their deal-making conversation on March 26, 2012 in Seoul was caught on open microphone, with the latter agreeing to Obama's proposition that Russians would be patient until he secured his second term as president.

Quite obviously, the strong likelihood is that Pakistan Prime Minister Imran Khan's reported optimism was not intuitively arrived at when he told the international media on Tuesday that if Prime Minister Narendra Damodardas Modi won a second term in office, a Kashmir settlement was entirely conceivable.

Imran Khan would only have spoken with the full awareness of Modi's complex political personality.

In particular, he has the great advantage of being privy to the confidential exchanges between then Pakistan prime minister Nawaz Sharif and Modi during the latter's celebrated surprise visit to Lahore in December 2015 as well as the 'back channel' conversations between the national security advisors of the two countries.

Unlike in our dysfunctional system in most recent years, Pakistan's ISI keeps meticulous track of all high-level exchanges with India.

The Indian public knows hardly anything about what transpired between Modi and Nawaz in Lahore -- or for that matter, during their famous 'informal conversation' in Paris 25 days earlier, which probably set up the Lahore meeting.

But make no mistake. The ISI kept track.

The Pakistani side was actually expecting Modi's surprise visit to Lahore and had made elaborate arrangements for a red carpet reception for the visiting Indian leader.

Beyond doubt, every move that Modi made on Pakistani soil and every word he spoke to Nawaz was stored away as memory in the ISI archives.

Suffice to say, it is only Modi who is today in a position to clarify on what basis Imran Khan could have said with such audacity, 'Perhaps if the BJP -- a right-wing party -- wins, some kind of settlement in Kashmir could be reached.'

Equally, Imran Khan's caustic remark about the Congress is not unwarranted when he said he didn't expect the grand old party to deliver on a Kashmir settlement.

Imran Khan cannot be unaware that although Manmohan Singh (or his NSAs) didn't hang tough on Pakistan in the Indian media, he was tough as nail when it came to national interests and didn't make any concessions whatsoever to Pakistan.

In fact, the Congress party's record has been consistently 'hardline' although it couldn't match Modi's rhetoric.

The Bangladesh War, occupation of Siachen, maritime boundary in Sir Creek -- three templates in India-Pakistan relations that alone should testify to the legacy of Congress rule.

It must be remembered that the systematic erosion of Kashmir's autonomy and India's breach of promises to the Kashmir people took place in the decades since the fifties right up to the eighties only under Congress governments when the BJP wasn't even around as a gadfly.

So, the big question is about the signal that Imran Khan is giving when he reposes confidence in Modi to settle the Kashmir problem.

Contextually, he would have three objectives -- one, cautioning Modi against going too far in demonising Pakistan in his election rallies, no matter his political compulsions; two, projecting to the international audience an air of reasonableness in Pakistani policies; and, three, forestalling any precipitate move by Modi to ratchet up tensions with Pakistan in the coming weeks between now and May 23, especially if a spectre of defeat haunts him in the election.

This last point is relevant if we factor in the decision by Islamabad only last Sunday to publicise 'reliable intelligence' and 'authentic information' available with it to the effect that India might make some military moves against Pakistan in the second half of April, once the elections got under way in India, out of which Modi could make political capital by whipping up jingoism.

The intriguing part in all this is what Imran Khan really thinks of Modi as a politician.

Historically, there is a perception in Pakistan that the BJP is a 'Baniya party' of wheeler-dealers. But the past five years of BJP rule would have somewhat dispelled such notions.

Imran Khan cannot but be aware that Modi is a creation of the RSS and unless and until he broke that umbilical cord, he cannot plough a de-ideologised furrow toward Pakistan. 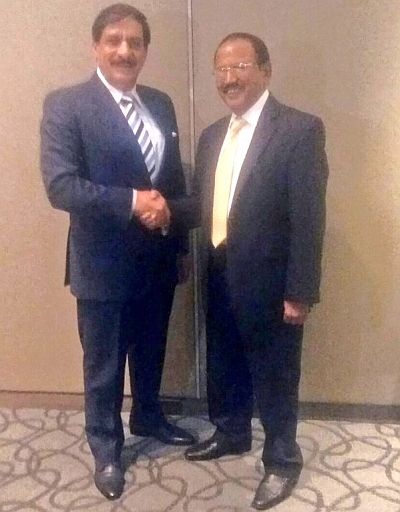 Now, this is where the Modi-Nawaz exchanges and the back channel conversations between National Security Adviser Ajit Kumar Doval and his then counterpart in Islamabad, Lieutenant General Nasser Khan Janjua (retd), come into play.

The Indian public knows nothing about the contents of these exchanges and conversations. But the ISI knows, the GHQ in Rawalpindi knows and Imran Khan knows.

(And, indeed, Modi and Doval know.)

Importantly, therefore, a Pakistani prime minister for the first time in the past seven decades has interfered in an Indian general election and showed his preference for a particular political leader.

This is unacceptable. This is blackmail.

Yet, Modi only is responsible for it. Figuring out that he has nothing positive to project before the Indian electorate, Modi made Pakistan the centre piece of his election campaign to malign and embarrass the Congress and to deflect attention from burning issues such as unemployment, the agrarian crisis, the Rafale scam, etc.

But by doing so, Modi held open a door through which Imran Khan has simply walked in.

Look at the kind of things Imran Khan says on the eve of an Indian general election -- that he prefers Modi (to Rahul Gandhi) as his interlocutor; that 'Muslim-ness is being attacked' in India; that Muslims in India are unhappy; that Modi is electioneering like Israel's Netanyahu, exploiting 'fear and nationalist feeling'; that J&K's special status is under attack; that Kashmiris are waging a political struggle and there is no military solution to it; that 'there is still the possibility if the polls turn against Modi in the next few weeks that India could take some further military action against Pakistan' and so on.

These are exceptional remarks for the leader of a foreign country to make.

But Modi cannot take exception, because he only invited this Pakistani slur on India's democracy.

Clearly, Pakistan is blackmailing Modi and Doval. This seems like Modi's 'Obama moment' in Seoul 7 years ago. 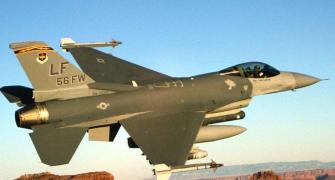 Pakistan has history of lying about military setbacks

One of RR owners slapped me: Taylor's explosive claim