China-Pakistan ties get stronger by the day

'Listing Masood Azhar as a 'global terrorist' was done with Islamabad and Imran Khan's concurrence.'
'It was not prompted by the so-called 'Wuhan spirit'.'
'The relationship between the two 'iron brothers' has not been dented,' points out former RA&W officer and China expert Jayadeva Ranade. 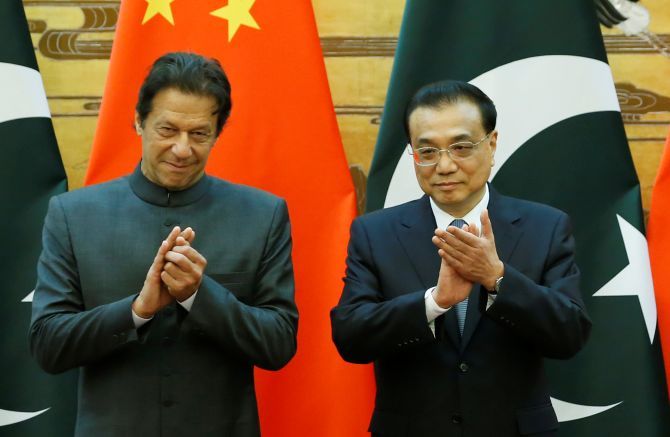 These underscore that Beijing's decision last month to withdraw its 'technical hold' at the UN sanctions committee on listing Masood Azhar as a 'global terrorist' was done with Islamabad and Pakistan Prime Minister Imran Khan's concurrence.

It was not prompted by the so-called 'Wuhan spirit'. The relationship between the two 'iron brothers' has not been dented.

Pertinent in this context was the visit of Chinese Vice Foreign Minister Kong Xuanyou -- appointed last month as China's ambassador to Japan -- to Islamabad in March at the height of India-Pakistan tensions.

Undoubtedly, while Kong advised Pakistan not to escalate the situation beyond a point, he also conveyed assurances of China's continuing support.

Chinese leaders have since April 2015 been insisting that India ease tensions with Pakistan and resolve the Kashmir issue before its relations with China improve.

China has also offered Pakistan some palliatives. While probably explaining that China risks being isolated in the international community and seen as supporting terrorism if it continued to maintain its 'technical hold' at the UN sanctions committee on Masood Azhar, especially after the horrendous attacks by Islamist terrorists in Colombo, it would have suggested that this could hamper China's efforts to aid Pakistan in future.

China's leadership and Imran Khan additionally concluded agreements on loans and assistance for approximately $20 billion to a cash-strapped Pakistan. Interestingly, this comes in the midst of an ongoing review of 50 percent of the projects under the China Pakistan Economic Corridor ordered by Imran Khan!

There are clear indicators that China will continue with the CPEC and particularly those projects that would augment its military capabilities.

When Pakistan raised objections a couple of years ago that all financial assistance for CPEC projects were loans and none as grants, China agreed to designate some projects as grants.

Not surprisingly, these were mainly centered on Gwadar port, described by Chinese naval experts writing in Chinese military publications as a 'logistics base' for the Chinese navy.

With resentment mounting among the Baluchis against CPEC projects, including Gwadar, in Baluchistan, the Chinese quietly informed the Pakistan authorities that they would be raising a 'private' army to ensure the security of their workers and CPEC projects.

This, despite Pakistan having deployed a special division under a major general for this specific task.

Towards the end of last year,the official Chinese media disclosed that the China Overseas Security Company had been deployed in Pakistan to protect CPEC projects.

China has many private security companies staffed by retired or demobilised members of the People's Liberation Army, People's Armed Police or China's public security apparatus deployed mainly in Africa, but this is the first in South Asia.

Most recently on May 9, the Pakistan government announced the allocation of funds for the second phase of the secure fibre optic communications project linking Kashgar, headquarters of the PLA South Xinjiang Military District, with Rawalpindi where the Pakistan army GHQ is located.

Contract for implementation of the project has been awarded to the Chinese telecommunications company Huawei. Phase 1 of the cable was activated for commercial use this February.

As per official sources, construction of the cross border optical fibre cable system comprising land-based cables connecting China and Pakistan for international connectivity of voice/data traffic has been allocated Pakistani Rs 52.790 million by the government of Pakistan in addition to Pakistani Rs 425 million by way of foreign aid from China's Export Import Bank in the form of a concessionary loan.

This underground optical fibre cable, which has clear military implications, now covers the distance between the Khunjerab Pass in China, along the Karakoram range and Rawalpindi in Pakistan's Punjab province, covering 820 kilometers. It is reported to include a 172 km long arial backup link between Karimabad to Khunjerab resulting in cross-border connectivity between China and Pakistan.

The fibre optic cable is also being extended to connect with Urumqi in the Xinjiang-Uyghur Autonomous Regionand Rawalpindi with Gwadar.

Jayadeva Ranade -- former additional secretary in the Cabinet Secretariat, Government of India -- is presently President of the Centre for China Analysis and Strategy. 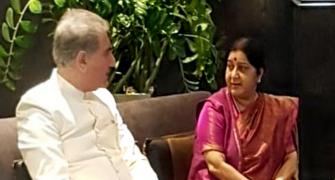 Why did India take mithai for Pakistan?

US-China trade war: What India must do

Wuhan Revisited: One year after the Modi-Xi Summit

China hails Modi victory. This is why

MUST READ: How India, China can work together