News
Business
Movies
Sports
Cricket
Get Ahead
Money Tips
Shopping
Sign in  |  Create a Rediffmail account
Rediff.com  » News » 2020 will be the year of the economy, but...

'Neither Modi nor the BJP have lost control over the minds and votes of their original supporters due to their tremendous political ability to play upon baser communal instincts.'
'But this buoyant support will melt away if the economic scenario remains depressing.'
'That makes 2020 an interesting year to watch out for,' notes Sheela Bhatt. 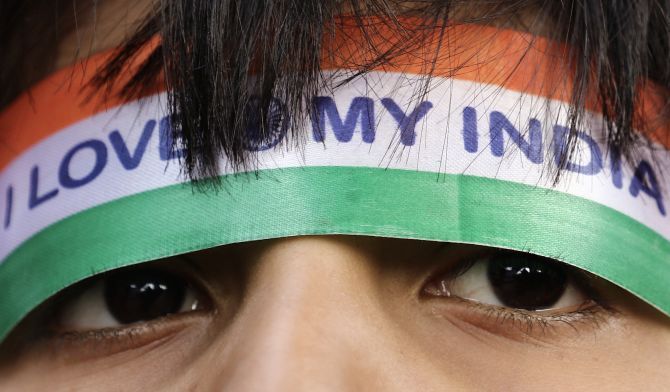 After a tumultuous 2019 which brought at its very end anti-government forces and Muslims out on the streets, the protests leading to the death of 20 people, one looks forward to the new year with unease and caution.

2020, for obvious reasons, will be the year of the economy.

Prime Minister Narendra Damodardas Modi and his team expect that three quarters from now, they will be able to show better economic parameters.

It is 'perform or perish' time on the economic front.

That in just six months of winning a historic electoral verdict from voters the government is faced with a genuine mass movement speaks volumes about an India that is transforming under Modi's rule and is convulsed over many things, including debates over the Constitution and the spirit behind it post-1947.

Whether it will end up for the better, good or worse will, among other things, depend on Modi's delivery on the economic front.

Unlike what his detractors allege, Modi and his team are over-cautious of the economic reality that confronts them. A lot of decisions are being taken at multiple levels to push the economic systems to deliver.

A powerful Bharatiya Janata leader told this correspondent that Modi will set the agenda for the 2024 election in 2020.

Explaining how, the Cabinet minister stated last week in an off the record conversation that India is moving towards a new political-economic agenda in 2020.

"Seculars will welcome the situation where the economy and development will be the issues in future elections and not identity politics," the minister said. "We won't err in setting the agenda of development. Ayodhya and Kashmir, the issues which dominated past elections and the BJP voters's minds since 1947, have been settled in the national interest."

However, looking at the ground realities, things don't look as if they unfolding in a linear fashion.

It is difficult to understand how the BJP will offer a tension-free all-round social environment for economic progress while continuing its saffron identity politics.

When the government itself proactively opens up the zakhm of Partition 72 years later, it can't shift the blame if things turn messy in 2020.

"During the Bangladesh war around 1.2 million refugees arrived in India. It is believed that a majority of them were Hindus. Indira Gandhi could have extended citizenship to them," says BJP General Secretary Ram Madhav. "Even under the UN Convention Relating to Status of Refugees, such refugees have a right to citizenship in the host country."

Before it became contentious and the youth and Muslims in large numbers hit the streets, the government deliberately linked the Citizenship (Amendment) Act to the National Register of Citizens and the National Population Register, and clearly acknowledged it in home ministry documents. It was because of this that the issue created a massive backlash, turning the entire issue into a CAA versus the Constitution confrontation.

When the mass protests against the CAA erupted all over India, the government was caught unawares by its scale.

The situation may be 'under control' now with the help of police batons, but it has given enough hints that if the Opposition parties unite in the states, then the grand idea of setting the economic agenda for the third decade of the 21st century can be derailed.

The only thing going well for the BJP is that its core saffronised support remains consolidated and, one daresay, content.

In the eyes of this crowd, Modi remains far ahead of others in the national arena and the only one of consequence.

Also, the Congress didn't take a nuanced stand on the issue covering all aspects, including the Partition sentiment, while highlighting the problems with the CAA.

It fast-forwarded its stand to the NRC and seeing it, the government retreated, created confusion and put aside the NRC debate to save the day.

In the May 2019 election the voters had supported Modi for a second term, and the flurry of political developments since then has not changed them. The erosion of the BJP in state elections may have affected power politics, but not its power base.

To lift the BJP's supporters and change the tone, party President Amit Anilchandra Shah desperately needs one victory in a state election.

If the BJP fails to win Bengal in 2021, the BJP will lose more than the state.

A victory in Bengal will impact deeply the BJP's next decade. Its ideological standing and expansion plan for the next general election depends on winning Bengal.

In spite of serious electoral setbacks in Jharkhand and Haryana, and a defeat of Modi-Shah's political strategy in Maharashtra, neither Modi nor the BJP have lost control over the minds and votes of their original supporters due to their tremendous political ability to play upon baser communal instincts.

During the anti-CAA demonstrations in Uttar Pradesh one saw an unjustifiably harsh clampdown by the UP police against agitators and by the Delhi police on the Jamia Milia campus, but public opinion for or against it remains split along communal lines, giving a clear political advantage to the BJP.

In fact, within the Sangh family there is near unanimity over the political stand taken by Modi and Shah over making redundant Article 370, the final outcome of the Ayodhya movement and the CAA. It is difficult to find substantial ideological dissent among the BJP crowd who voted for Modi in 2014 and 2019.

But this buoyant support will melt away if the economic scenario remains depressing. That makes 2020 an interesting year to watch out for.

Former home secretary G K Pillai put it aptly once, that if the GDP doesn't remain at a certain level it becomes difficult to maintain law and order within India. What he meant was that the crime rate in Indian society is interlinked with the GDP rate. Better GDP helps the men in khakhi control crime.

That is why, in spite of not losing support over its explosive decisions taken in 2019, the Modi government cannot be complacent. Actually, India can't be.

Primarily because the theatre to vent anti-government emotions is readily available.

This creative outburst of 'secular liberals' in the form of slogans, poems, memes, columns and WhatsApp messages and effective outbursts of a variety of minority groups against the CAA is the ready platform to take the anti-government battle to the next level.

They are helped along by the Western media's passionate pursuit to remind India of its democratic commitment.

A senior source in the government, who is in the know of things, claims, "Look, Donald Trump, Boris Johnson, Vladimir Putin, Xi Jinping and Modi are ruling their respective countries at the same time. How helpful it is for India to take decisions that have an impact on its diplomacy!"

According to him, India's relations with Russia is "excellent" and with China "steady". On matters like Kashmir, the bucks stops at Trump's table. These three bilateral relations give Modi strength in spite of the "extremely critical" Western media coverage.

However, when history is in the making, one trigger can and will change the current situation.

The government is unlikely to retreat on the CAA in spite of viral renditions like Varun Grover's emotive poem Hum kaagaz nahin dikhaenge and impressive protests like in Shaheen Bagh.

Soon after passing the CAA there may have been confusion, lack of clarity and absence of communication by the government over the entire gamut of issues related to 'citizenship'. But the government made a U-turn saying the NRC was not on the table 'for now'.

That claim, nobody believes.

One voter asked looking into the camera, 'What is the proof Modi is an Indian citizen, how will he prove it? I want to know what will be the criteria to prove it and which particular card will be enough to prove that I am an Indian citizen?'

These are real questions confounding not only Muslims, but Hindus as well.

As the CAA is likely to stay, the need of the hour is to not rush in with the NRC.

There should be an all-party committee with experts to decide a transparent set of criteria on who is an Indian citizen.

In many ways, it is more important than setting the economy right.

Sheela Bhatt, arguably India's finest political journalist, has covered Indian politics for 40 years. You can reach her at news@rediff.co.in. 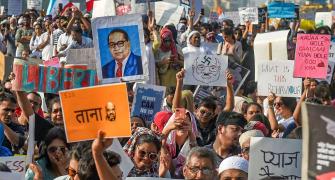 How would my mother know her father's date of birth? 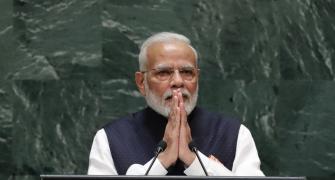 They sit there, stoic, implacable, defiant