The situation in Nepal is becoming explosive and uncontrollable. The people's anger is focussed entirely on King Gyanendra, not on corruption, poverty, unemployment or lack of development. It may have accumulated over the reasons for all these reasons but now they only want to reduce the king's powers. 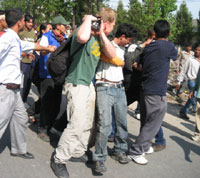 "Sovereignty is more important than food," says Ratan Bhandari, a student of anthropology. Young Nepalis like them are of the opinion that to initiate Nepal into the 21st century, the king 'must be shifted from the palace to the museum'.

More than half of the supporters of Nepal's political parties are below 30 years of ago; they have no reverence for the king and do not hesitate to demonise him on the streets, like never before.

It seems time for India and the rest of the world to watch as a 'new Nepal' emerges.

'Ram naam satya ho, Gyanendra ko hatya ho' was the slogan being chanted as jubilant people burnt an effigy of the king on Sunday.

Geeta Ghimre, a demonstrator, said, "Janandolan-2 (as this movement against the monarchy has been named) is fast turning into mukti andolan (freedom movement)."

The protestors' resolve to reduce the king's power seems to be getting stronger by the day. The Nepali people have become remarkably aware of their right to decide the destiny of both the king and Nepal's political future. There is a strong belief that the problem has been created both by the Maoists and the king's autocracy and can be tackled only by this janandolan.

At the moment, the thousands defying the curfew on the streets of Kathmandu are shouting that 'nothing less than sambidhan sabha is acceptable'. It is, currently, difficult for the political parties to defy the agenda that the people are forcefully carving out. In fact, public pressure is so immense on political parties that they are taking their own time to reach any decision. Despite the fact that the king's speech on April 21 got international support, political parties were forced to ask for more.

When it was argued that it would be impossible for the international community to ignore killings of innocents by Nepal's Maoists, A K Shreshtha, a young demonstator said, "It is not the seven-party alliance in Nepal but the eight-party alliance, which includes the Maoists."

The Seven Party Alliance, who have entered into an understanding with the Maoists feel that even one wrong move can shift the people's target to themselves and are, therefore, very vulnerable at this point in time. What has added fuel to the fire has been the king's announcement that he will give executive powers to the political parties.

Gopal Chintan and Pradeep Pokharel, human rights activists would like to strongly urge diplomatic communities and international organisations - both in Kathmandu and abroad - not to rush into making faulty statements that encourage the King and his security forces to be more repressive. They add that India will have to be extra-careful in taking any position because 'India matters more' than any other country.

The total rejection of the king's speech by the people has made leaders like former prime minister G P Koirala and others quite worried. If any kind of international support - covert or overt - is extended to the king at this moment, people are likely to turn their anger against foreigners in Nepal, said Chintan.

On Sunday, there were placards against the United States and Kofi Annan, all along the Ring Road. Some of the demonstrators also spoke out against India.

Huge demonstrations were seen in Kalanki, Balaju, Gongubu, Koteshwar and many other areas where people were pitted against the Nepal police and Nepal army's cordons.

Bystanders could see that people are now getting confused by the political leaders' silence and restless by the king's refusal to indicate that he will concede to 'something real'.

"People will just not accept anything symbolic", said Nimish Kumar Oli, a medical student who was a part of the demonstrations. Oli and other students had come with an effigy of the king, which they first beat up, then spat on before setting afire. "The graveyard is calling the king," they chanted.

Although, on April 21, India supported the king's announcement, Foreign Secretary Shyam Saran 'corrected' India's stand the next day, saying, "We have always felt that political power should be exercised by the representatives of the people, and it is for them to really decide what the future of Nepal is going to be."

rediff.com spoke to the Nepalese on the streets, who asked why India supported the king's announcement, which was rejected by the people of Nepal?

In fact, after the king's address, Leftist groups have come out with five demands -

However, Left parties have not spoken about the 'crimes' of the Maoists or demanded any kind of action against them.

For the past 20 days in Nepal, people have been demonstrating peacefully against the monarchy. They have been inspired to join the protests by local units of political parties and by Maoists in villages and districts. Without the Maoists, the movement would not have picked up well, said Dr Santosh Thakur, who is also a participant.

In Kathmandu, hundreds of people walk daily, in a remarkably organised manner, along the Ring Road, which encircles the city. They shout slogans, expressing their anger against the king. A lot of women and older people stand by the roadside, providing them with water and silent but solid support.

The Ring Road of Kathmandu, around 27 km long, is the battleground of the current struggle, where ordinary Nepalese people have shown tremendous resolve to instill democracy in their country.

The most surprising - and rather amazing - aspect of the struggle against the king in Kathmandu (and elsewhere) is that there are no key political figures leading the crowd and there are no heroes of the historic peaceful movement which has killed more than 12 innocent people in police firing.

There is nobody in Nepal who can individually take the credit for such widespread, qualitative and largely non-violent  movement. However, the tenor is changing fast after the king's speech, which mentioned neither the people's aspirations, nor this movement.

On Sunday, at around 3.15 pm, thousands of protestors encountered a cordon of police near Balaju on the Ring Road.

When the police took on the peaceful and unarmed crowd, it was caught unaware. People turned around and started to run, with the armed police chasing them. About three dozen police, with guns in their hands, chasing more than 5000 people.

In that charged atmosphere, a woman challenged the police to shoot her. She looked disturbed and was ignored by the police. But a young boy reprimanded her. The situation was so volatile that the woman beat the young boy, accusing him of being a royal supporter and provoking the crowd to lynch him and a tourist who tried to rescue him. Even as the media and elders in the crowd tried to determine the identity of the boy, the crowd's anger did not permit them.

This was one just one clear example of the fact that hatred towards the king has become so all-encompassing that anyone could be seen as siding with him. When security helicopters review the demonstrations, the crowds shout - go away, kill the king, not us. Two thousand voices rising in a chorus.

Several young people told the media that the imposition of a daily curfew is indicative of 'King Gyanendra's insecurity and fear of the people'.

"If he does not meet our demands, we will gatecrash his palace," they said.

It seems high time that senior Nepali leaders like Koirala and other former prime ministers lead the crowds by joining them on the streets.

From Philippines with love: $375m order for BrahMos