India and the United States seem to be working at cross-purposes in carrying forward their strategic interests in Nepal.

While the US is supporting King Gyanendra and flirting with idea of supplying arms to the Royal Nepal Army to strengthen the hands of the monarch, India is covertly bridging the gaps between the seven party alliance and Maoist extremists who are locked in a deadly war with the establishment headed by the king.

The Maoists on Monday announced a unilateral indefinite ceasefire in the Nepalese capital Kathmandu, ahead of this week's massive pro-democracy protests against King Gyanendra's regime.

But the crisis is far from resolved.

In India, two clear opinions have emerged out of the Nepal crisis.

One school of thought believes that the Maoists should not be trusted under any circumstance and India should not help, overtly or covertly, to bring them to power. 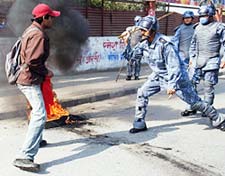 The Americans and India's intelligence hawks support this idea.

The Manmohan Singh government -- probably under the influence of its allies, the Communist Party of India-Marxist -- believes that people's aspiration for democracy is overwhelming in Nepal and popular support for the king is on the wane.

Many independent strategic thinkers in India also believe that the beginning of the end of Nepal's monarchy has already begun.

Image: Nepal riot police lathi-charge a student participating in a March 24 protest against the arrest of the head of the Communist Party of Nepal-Unified Marxist Leninist Madhav Kumar Nepal.

"There is nothing wrong in India supporting groups representing people of Nepal," says Professor S D Muni, India's foremost expert on India-Nepal relations. "Although the Government of India has not said anything against the king, but if at all India has supported the political parties and Maoists there is no harm because they are representing people, the king is not," he adds.

On February 9, after the not-so-credible municipal elections in Nepal, the official Indian statement said, 'We are of the view that the grave challenges facing Nepal demand the initiation of a genuine process of national reconciliation, dialogue and participation which can facilitate a peaceful political settlement.'

The foreign office statement said that any credible electoral exercise should have the active involvement and participation of all the mainstream parties. Only then would such elections be able to contribute to the restoration of democracy and political stability, it added.

The king doesn't seem to be listening.

For the last few months, India is supporting weak Nepalese political parties that are disunited and largely corrupt. These parties don't seem capable of forcing the public opinion on the king. The newly founded alliance of seven political parties and the Maoists have commenced mass protests all over Nepal from April 6.

The Maoists are far more effective than political parties in the interiors of Nepal.

One school of thought in India cringes at the thought of any messing around with the Maoists.

"Maoists will never abandon violence," says Dr S Chandrasekharan, former intelligence officer and an experienced hand on Nepal. "We helped Bangladesh to gain independence and now their polity has turned against India. Nepalese Maoists will treat India in the same way. Once they are in power they will do everything to strengthen the Indian Maoists' violent struggle," he adds.

Professor Muni disagrees. "Why will Maoists not abandon violence? Why will violence be more important to them than power?" he asks. "Rather, if India and Nepalese Maoists come closer it will have a positive impact on Indian Naxalites who will get a cue to join the democratic process like the Nepalese Maoists."

India has high stakes in the internal stability of neighbouring Nepal -- higher than ever, because of the dramatic rise of Leftwing extremism in Nepal and India.

But coherent policy-making with reference to Nepal continues to pose a dilemma for the Manmohan Singh government.

The United Progressive Alliance government might have won praise from many strategic analysts for its handling of relations with the US, but it continues to give the impression of being confused in policy-formulation with regard to Nepal ever since the king overturned the democratic institutions of the country in February last year and took all power in his hands under the pretext that the political parties had failed to effectively deal with the Maoists.

The king was right when he said political parties have failed but he throttled democracy and put national security and political stability under serious threat.

Traditionally, India's policy towards Nepal had rested on the twin pillars of the king as the head of State and an elected democratic government being responsible for governance.

Image: Nepalese pro-democracy activists demand the restoration of democracy in a rally at Patan, near Kathmandu, on March 31.

Now, with the king assuming total responsibility of governance with the help of nominated ministers and with the monarch showing no inclination to restore a genuine democracy in the foreseeable future, India finds itself faced with the dilemma of having to choose between the king and political parties that are getting increasingly disenchanted with the continuance of the monarchy.

India's dilemma has been further complicated by the Maoists coming together with other political parties in opposing the king and making overtures to India through various interviews intelligently given to the media by Prachanda, Nepal's Maoist leader, who has been projecting his guerrillas as not detrimental to India's interests.

Master strategist Prachanda has also called for a common slogan, a common front and programme for a model of the 'people's parallel government against military power.' That means he wants to set the agenda to be followed by the political parties.

The US and China, much to India's discomfiture, have been evincing increasing interest in Nepal in order to promote their own long-term agenda. James Moriarty, the US ambassador in Nepal, is hyperactive in helping the king in nabbing Maoists.

The US is opposed to the king's overthrow of democracy, but at the same time Washington is not prepared to relent in its opposition to the Maoists.

The Chinese are trying to project themselves as genuine friends of Nepal, wanting to help the country irrespective of its political set-up. They call it a 'State to State' relationship.

With China and US backing the king, Nepalese Home Minister Kamal Thapa is busy picking holes in the seven party alliance's agreement with the Maoist rebels. Thapa wants politicians to resume talks with King Gyanendra's administration on ending the country's political crisis.

India still remains the most influential external factor in Nepal.

Many believe that even the US can't go much further without taking India's help. After the palace coup, the United Kingdom, the US and India were working in tandem but lately the scenario has changed.

The questions confronting the Manmohan Singh government with regard to Nepal are:

"India does have some options to tackle the crisis," says Chandrasekharan. "India should take into account that even now 25 per cent of Nepalese are supporting the monarchy. India should support the monarchy and with help of the US and UK force the king to restore democracy."

He recommends that New Delhi -- with the help of the CPI-M and other political contacts -- should force the Nepalese Maoists to declare a ceasefire for two years.

Either way, it's a tricky situation.

And there is an uneasy silence on whether the National Security Advisory Board -- which is now headed by Maharaj Kumar Rasgotra, former foreign secretary and former ambassador to Nepal who is a close personal friend of the Nepal king -- has been able to come up with a credible roadmap India can follow.