The Coolest Cowboys of all time! 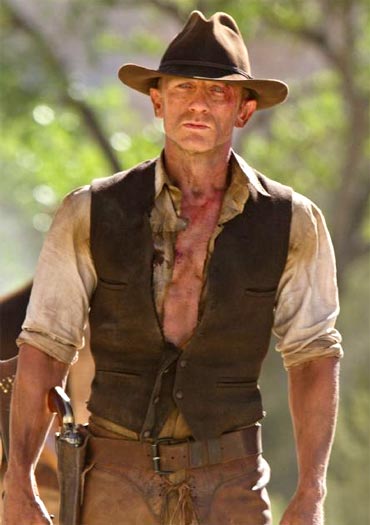 The cowboy is possibly one of Hollywood's greatest inventions.

The hat-wearing, hard-drinking cowboys, mythified by the American Westerns, were not coy boys; they were men who didn't hanker for respect -- they commanded it.

Expert gunslingers with a cocky attitude to match, they symbolised a time when masculinity was measured in courage. You would never see a cowboy resting on past laurels. They were always at the frontier, answering the call of duty.

As 007 star Daniel Craig readies to play one in Cowboys & Aliens, it's time to doff our hat to the most iconic cowboys in movie history. 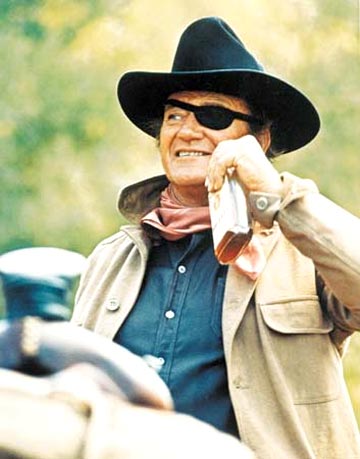 Image: A still from True Grit

The legend who once joked that he should have put that eye patch on 35 years earlier in his Oscar acceptance speech epitomises the most enduring Western hero there ever was.

Once a B-movie struggler, the man with the famous walk set a benchmark for cowboy characters in film after film. His lines have tremendously influenced popular culture and must one say, an inspiration to scriptwriters, copywriters and their ilk for years now.

Come on, here's an actor who in that rumbling baritone could get away by referring to James Stewart as 'pilgrim' throughout The Man Who Shot Liberty Valance. Only John Wayne who insisted on talking low and slow could have done that. He remains American cinema's most beloved gifts. 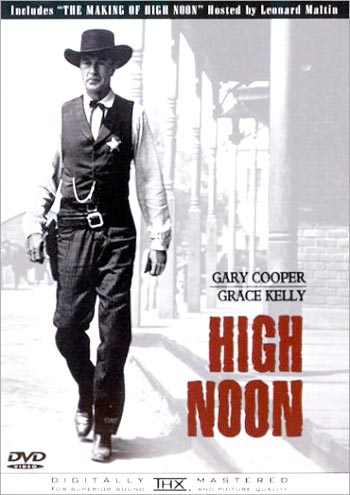 'The general consensus seems to be that I don't act at all,' remarked the actor, rather humbly.

And he actually never did act -- he was such a natural!

Wayne's screen rival for the title of the cowboy at a time when both were major stars, Gary Cooper used less to say more. He was blessed with an infectious charm, something which made him quite popular amongst the ladies.

Cooper acted in Westerns because he believed they depicted American values. 'You feel real when you act in them, you don't feel actorish,' he observed. 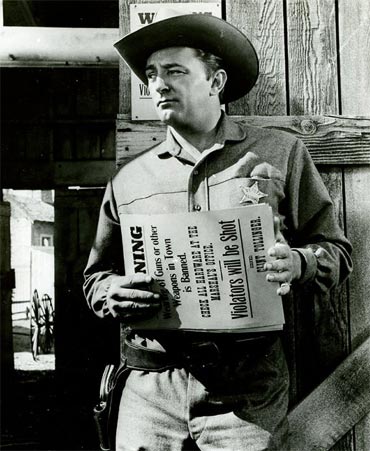 Image: A still from Man With The Gun

There is slow-burning ruggedness about his face and raw depth in his voice. He made the bad boys look cool. He was a tough guy who could take on just about anyone, no matter what. Robert Mitchum set the agenda for the anti-hero.

In El Dorado, just watch him, terribly sloshed, swagger into a saloon and the nonchalance with which he handles his gun.

Addressing Joe, who's playing the piano, Mitchum says, 'Wouldn't you like to move away from that piano, Joe?' He turns volatile and bawls, 'Well, then move,' and fires away at the man using the piano as cover.

As a sheriff, who has become a laughing stock of the terrain because of his unapologetic obsession with the bottle, Mitchum shines even in the presence of Wayne.

Top Cowboy Movies: El Dorado, Nevada, Blood on the Moon, West of the Pecos, The Wonderful Country, Man with the Gun, Track of the Cat and Pursued. 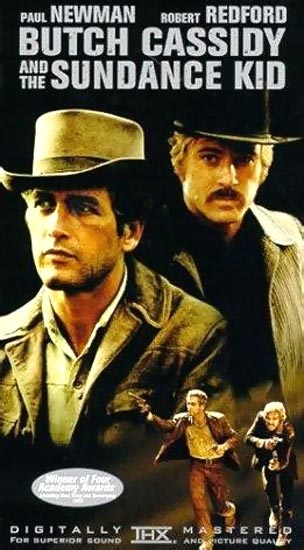 Image: A movie poster of Butch Cassidy and The Sundance Kid

There has never been a better looking cowboy and one doubts if there will ever be one. The blue-eyed actor made a lasting impression on the Westerns.

Recognition and awards came late to him but his reputation amongst the people stood him in good stead.

Despite his cockiness in Butch Cassidy and the Sundance Kid Boy, in which he makes the memorable pronouncement, 'Boy, I got vision, and the rest of the world wears bifocals,' Newman, who died in 2008, was modest about his achievements.

He is believed to have imagined his epitaph with these words, 'Here lies Paul Newman, who died a failure because his eyes turned brown.' 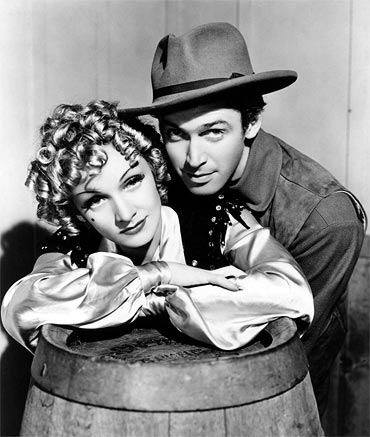 When did the well-mannered Average Jimmy, who represented the common American, cement his status as a cowboy? The titan of American movies, James Stewart saddled up (on his favourite stallion Pie) for the first time in the late 1930s, with Destry Rides Again.

Ever since, he built a repository of great Westerns alongside films as wide-ranging as It's a Wonderful Life, The Shop Around the Corner, The Philadelphia Story and Vertigo, Mr Smith Goes to Town.

Jimmy didn't end up as the stammering 'pilgrim', after all. Instead, he made movies that remain as wonderful as they were during their time.

Top Cowboy Movies: Destry Rides Again, The Man Who Shot Liberty Valance, Broken Arrow, Winchester '73, Bend of the River, The Naked Spur, The Far Country, How the West Was Won, Cheyenne Autumn and Two Rode Together. 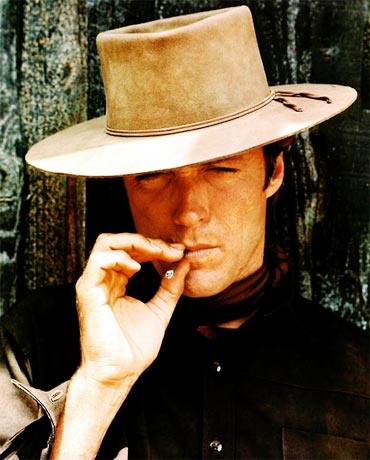 Long before he went behind the camera pumping marvellous, new vigour into his career, Clint Eastwood was a man with no name. Probably the first of his kind superstar to be born out of Spaghetti Westerns, Eastwood's cowboy approach was slow-moving action, slower in wild contrast to the long-titled Westerns on which his initial reputation rested.

Eastwood may be defined by the Sergio Leone phase (recalling the James Stewart-Anthony Mann combo) but he is in no way shackled by the poncho. Take away the gun from him and he is still left with the camera. 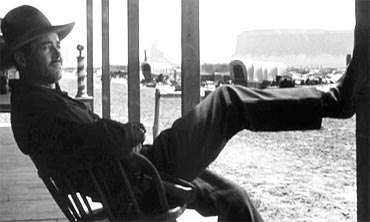 Image: A still from My Darling Clementine

This time, at the heart of John Ford's arid Monument Valley, in My Darling Clementine, is Marshal Wyatt Earp played by Henry Fonda.

Hank, as he was fondly nicknamed, is a towering presence in My Darling Clementine although the title role is essayed by Cathy Downs. In Jesse James, Fonda is a farm owner whose life takes a turn when nefarious elements threaten to grab his family's land.

In the later part of his career, Fonda teamed up with Sergio Leone to play a villain in Once Upon a Time in the West.

Top Cowboy Movies: My Darling Clementine, Jesse James, The Return of Frank James, Once Upon a Time in the West, How the West Was Won and The Tin Star. 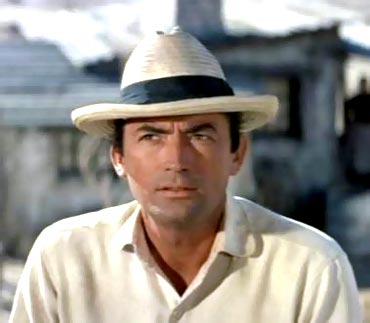 Image: A still from The Big Country

The suave and strikingly handsome actor left behind an interesting body of cowboy movies next to, of course, his soft romantic comedy Roman Holiday, the anti-Semitism drama Gentleman's Agreement and the legal drama To Kill a Mockingbird, amongst others.

Going against his image, Gregory put on that hat and left his footprint on the Old West turf. So, yes, the man riding 'cross the desert' that Bob Dylan referred to was Gregory, no less. 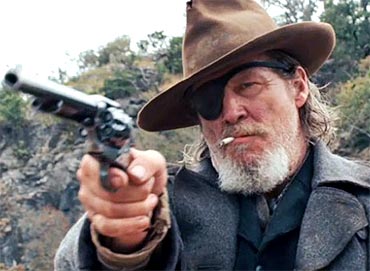 Image: A still from True Grit

What marks this rare actor out as Rooster Cogburn in the True Grit remake is his unusual corpulence. He's indeed the only heavyweight, who could have played a role immortalised by Wayne.

The influential American critic Roger Ebert probably summed his performance best, 'We always knew we were looking at John Wayne in the original True Grit (1969). When we see Rooster Cogburn in this version, we're not thinking about Jeff Bridges.'

Bridges, whose father acted in High Noon alongside Gary Cooper, fetched up as a con man in the Bad Company. 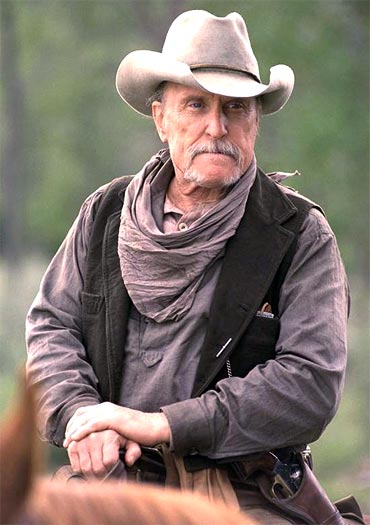 Image: A still from Open Range

The outlaw Lucky Pepper from True Grit, Duvall has contributed immensely to the Westerns. He may be the genre's last known star but this cowboy is no pushover.

Kevin Costner presented him with a fabulous role in the 2003 Western Open Range, in which Duvall plays the cattle rancher who slugs it out with the land sharks.

At 80, Duvall may be old but he's still an old hand at the desolate frontier life. After all, there's an unwritten rule: Don't mess with the old Texans.