'Biggest moment of my life was hugging Amitabh Bachchan' Image: Manoj Kumar Raina with Amitabh Bachchan
Rajul Hegde in Mumbai
Manoj Kumar Raina, 44, is the first contestant to win Rs one crore in the sixth season of Kaun Banega Crorepati.
A railway employee, he is the first Kashmiri to have made it to the hot seat.
Raina lives In Jammu with his parents, his wife and a 10-year-old son
.
He talks to Rajul Hegde about his big win, right in the opening weekend of KBC 6.
How did you reach the KBC forum?
I have been trying to come on KBC ever since its first season in 2000. Unfortunately, my telephone call never connected until this year.
On, May 19, 2012, I finally got through and subsequently cleared all preliminaries to reach the stage.
You did not try again after the first season?
No. I had given up, as my call never connected to the KBC qualifier forum. Then an incident changed my thinking. While travelling from a town called Reasi, where I was posted on a railway project, to Jammu, I was handed over a short poem by my boss. He wanted me to get it framed, as it was to be displayed in offices to inspire workers and officials. The message read: 'Koshish karne walon ke haar nahin hoti.'
Incidentally, it was written by Harivansh Rai Bachchan.
It motivated me to try again. I decided that I shouldn't feel like a loser, and instead, try for the next season of KBC.
As soon as Amitabh Bachchan announced the sixth season, I focused on making it to the show.
Did you do any kind of preparation before coming to the show?
I bought books on current affairs and general knowledge. I started reading the newspapers daily. We have limited access to television and other news. It is not easy to get information living in a small village like Sangaldan (210 km from Jammu).
Tell us about the experience of reaching the hot seat.
The shoot started on August 23. I could not qualify in the first two rounds of the Fastest Finger First. I was disappointed. My worry was how people back in my village would react if I went home without even reaching the hot seat.
On the previous day of the next round, I woke up at 4 am, took a taxi from the hotel to Sidhivinayak temple and then to Mahalaxmi temple. I felt better and got some confidence about qualifying this time. And I did (smiles).
Tags: KBC , Amitabh Bachchan , Harivansh Rai Bachchan , Manoj Kumar Raina , Banega Crorepati

'I will build a house in Kashmir with the prize money' 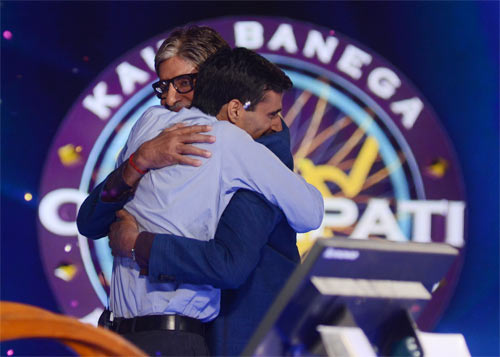 What was it like sitting in front of Amitabh Bachchan and playing the game?
It was a dream come true for me. My main motive to be on the show was to meet him, money was secondary. The biggest moment of my life was hugging Bachchanji. He is a real legend. He shows so much love and affection. His words makes you comfortable. I felt as if I was talking to a senior member of my family.
So you are a big fan of Mr Bachchan?
Yes. I was young when I first saw Mr Bachchan by chance at Srinagar airport. I didn't know anything about him then, and had not watched any of his films. He had come to Kashmir for the shooting of his film Silsila. After I got to know about him, I watched his films like Amar Akbar Anthony and became a huge fan.
Once we heard that he was shooting Laawaris near Kashmir. I went with my friends to watch the shooting; the location was 70 km from my village.
After reaching the venue, we learnt that the shooting got over two days ago. They told us that the crew had built a Hanuman temple for the shoot. I thought it was a big achievement to even go and do puja where Amitabhji has shot a scene. But we learnt that the sets had been dismantled. I went home disappointed.
Go on.
After a few years, I came to Mumbai to catch a glimpse of Mr Bachchan. I waited for him outside his bungalow, like his other fans. But I didn't get to meet him, and that was another disappointment.
What will you do with the prize money?
My house in Kashmir was destroyed during the militancy in 1990. We were forced to leave the place, and live in Jammu. Ever since, I have wanted to build a house in Kashmir, and that's what I want to do with the prize money.
Tags: Mr Bachchan , Kashmir , Amar Akbar Anthony , Amitabh Bachchan , Amitabhji
More