The MINI Cooper 5-door offers a blend of performance and practicality with the 1.5-litre diesel engine also being a frugal unit that will allow you to have fun on a daily basis, says Faisal Ali Khan of MotorBeam.com. 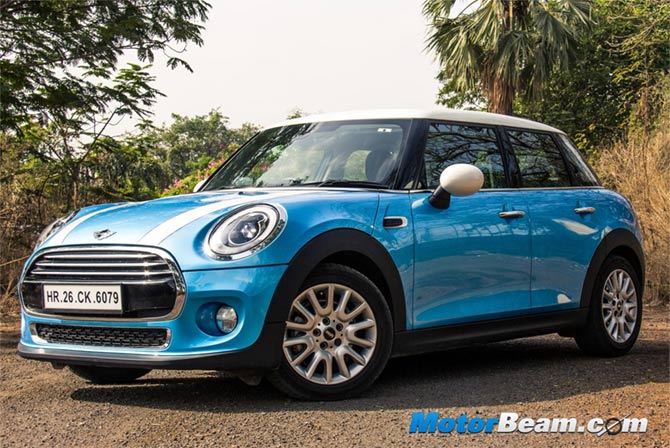 An icon of its time, the MINI Cooper is a niche product in India that has been positioned in the middle of the luxury segment as it competes against the BMW 1-Series, Mercedes A-Class and the likes as well as the Mercedes C-Class and BMW 3-Series in terms of pricing.

In its latest generation, MINI decided to add two extra doors at the rear on its spirited hatchback making it more practical while holding on to the impeccable levels of driving fun.

With superior handling, retro styling and a frugal yet fun to rev motor at its side, MotorBeam took the MINI Cooper 5-door for a drive to see how much fun it is.

Known for its modern retro charm, the MINI Cooper has evolved on the design theme of the first generation model, keeping the retro elements in sync with the new styling.

With the latest generation, MINI continues to offer just that but with a host of changes. 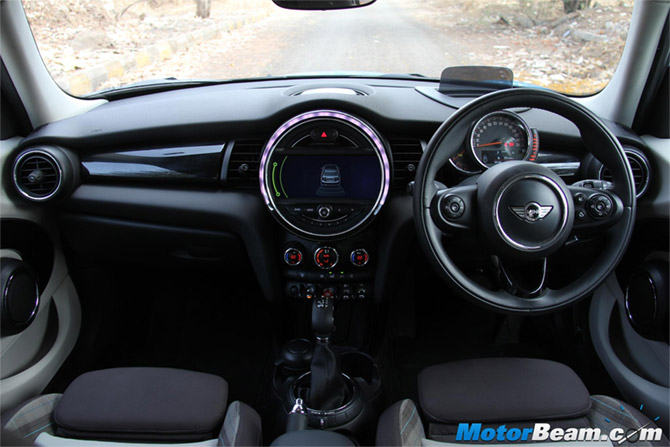 The front fascia is less curvy this time, while the side profile looks clutter free boasting of simple curves.

The rear too carries the curvy theme with the vertically placed tail lamps standing out beautifully.

With a host of customization options, the vehicle can be configured to meet your tastes and is certainly an eye catcher that will make you accustomed to camera flashes.

For the 5-door variant, the Cooper gets silver-finished alloy wheels in contrast to the black ones seen on the Cooper S that adds a premium touch.

Finished in a dual-tone black and beige colour scheme, the MINI Cooper's cabin boasts of impeccable quality with everything spherical in shape.

The rear too carries the curvy theme with the vertically placed tail lamps standing out beautifully.

With a host of customization options, the vehicle can be configured to meet your tastes and is certainly an eye catcher that will make you accustomed to camera flashes. 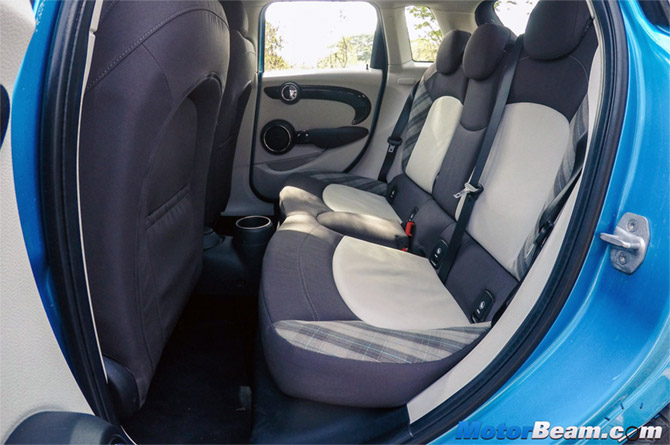 For the 5-door variant, the Cooper gets silver-finished alloy wheels in contrast to the black ones seen on the Cooper S that adds a premium touch.

Finished in a dual-tone black and beige colour scheme, the MINI Cooper's cabin boasts of impeccable quality with everything spherical in shape.

This system is controlled by the dial placed behind the gear knob which feels hard to reach.

The user interface (UI) too could have been better and is quite distractive while driving.

A 5-door version, the MINI Cooper offers easy ingress to the rear seat, but the small doors make it best accessible for kids with limited legroom available.

The front seats though are comfortable with several adjustment options and the steering can be adjusted with tilt and telescopic adjustments.

There is also a heads-up display (HUD) unit on offer that keeps vital information in front of the driver's field of view. 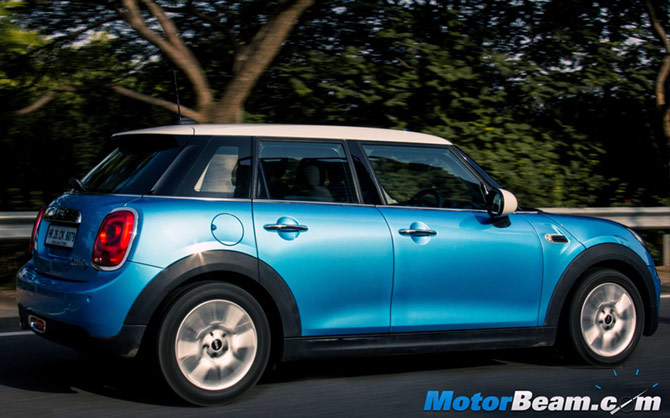 The pedals have the perfect positioning and the dead pedal is big enough too.

The MINI Cooper 5-door is powered by the 1.5-litre diesel engine producing 114 BHP of power and 270 Nm of torque, and while that may not seem like a lot on paper it certainly is a lot more fun on the road.

Power is always on offer instantly and is pushed to the front wheels via the smooth shifting 6-speed Steptronic automatic gearbox, but only once you get past that slight diesel lag on the car. Highway cruising is a breeze on the Cooper diesel and the engine is a peppy unit that never loses grunt.

Available with Sport and Green mode, the Cooper offers red-lining performance in the former with the steering getting a bit heavier while you do miss the paddle shifters.

Performance, however, comes at the cost of fuel efficiency. In the Green mode, the hatch gets tuned for maximum efficiency but does not hamper performance.

We were able to extract 12 km/l with aggressive driving and 14-15 km/l in sedate conditions. 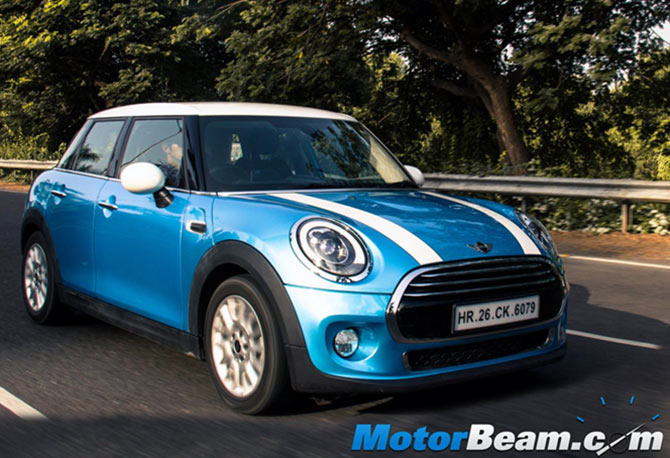 The company claims an ARAI certified figure of 21.15 km/l. Our VBOX tests confirmed that the MINI Cooper is capable of doing the 0-100 km/hr run in 9.8 seconds, close to the company's claim of 9.5 seconds.

While the Cooper S is more precise in handling, the MINI Cooper D is no less, offering the same superlative handling prowess.

The steering feels direct and responds well to inputs courtesy of the extremely stiff setup.

The hatchback moves like a train on rails and remains composed even at triple digit speeds while attacking corners comes with equal ease.

The stiff suspension setup also ensures that there isn't any body roll which does make you compromise on ride quality. 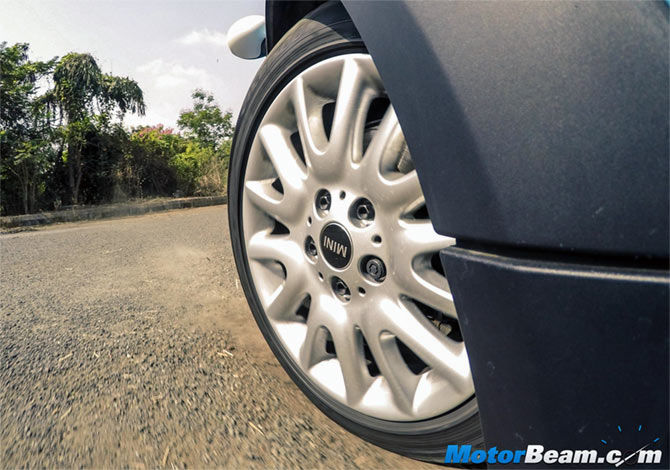 That said, the ride quality is far better than the previous generation models and not something to complain about as it gobbles road undulations easily.

Remember to evade a nasty pothole though, as it will throw you off at high speeds.

The Cooper D rides on run-flat tyres that can go a fair distance even after being punctured.

There is no spare wheel or puncture repair kit on offer, which makes the run flats only replaceable.

Stopping power is superlative on the Cooper as it sheds speeds quickly with the pedal offering rich bite. 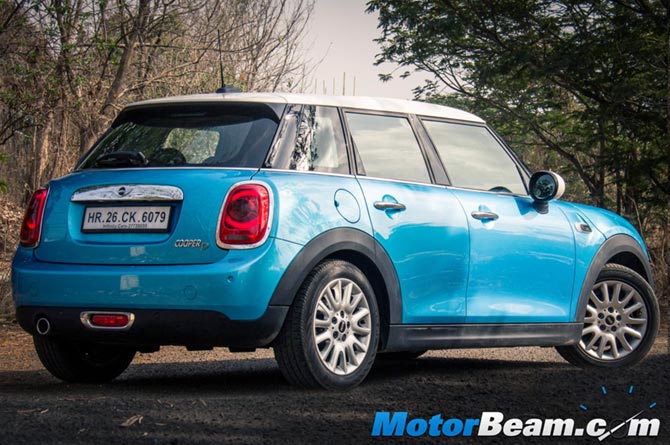 The hatchback though scored a 4 stars on the Euro NCAP crash tests, which was a bit disappointing considering the previous generation model scored a full 5 stars.

MINI has very limited presence in the country and finds its mainstay market to be in the urban areas at present with not not many outlets located in tier-II cities.

The MINI Cooper is easily one of the most fun to drive cars around and in the process also offers more snob value than its rivals which include the Mercedes A-Class and BMW 1-Series.

In its 5-door guise, the Cooper also happens to be a lot more practical and also enjoyable for those who want to ferry the kids around.

If you are looking for an upmarket hatchback that will keep the prestige value intact along with adrenaline rushing performance and loads of practicality; at Rs. 468,50,00 (on-road, Mumbai) the MINI Cooper 5-door is worth your money. 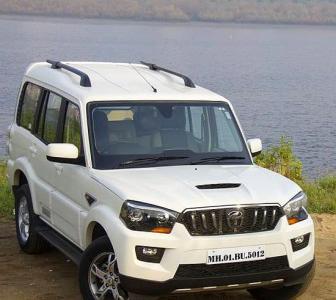 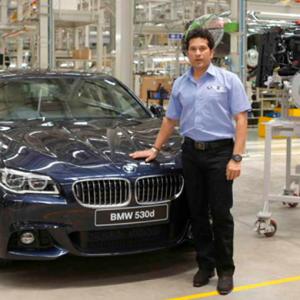 When Sachin built a BMW!