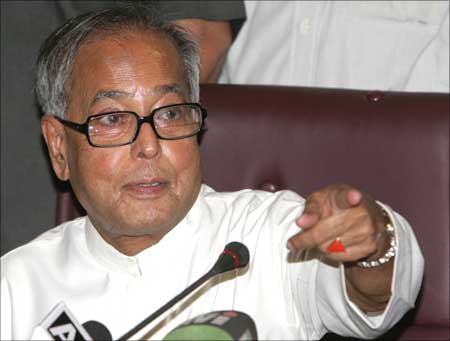 Former President Pranab Mukherjee accepting an invite from the Rashtriya Swayamsevak Sangh to be the chief guest at a function at the Sangh headquarters on June 7 snowballed into a row with a former Union minister urging him to reconsider his decision in the interest of secularism.

While the Congress refrained from making a comment on the issue, a party leader asked if the RSS accepted what the former president said as a minister and Congress leader about the Sangh being the 'worst' outfit which was 'communal', 'anti-national' and 'unpatriotic'.

While Union minister Nitin Gadkari defended Mukherjee's decision saying the RSS is not Pakistan's Inter-Services Intelligence and an 'untouchable' and it was a 'good beginning'.

The RSS, on its part, claimed even Mahatma Gandhi and Jaiprakash Narayan attended their functions and former prime minister Jawaharlal Nehru had invited its workers for the Republic Day parade in 1963 after being impressed with its work.

Former Union minister C K Jaffer Shareif, in a letter to Mukherjee, expressed surprise over the move and said he like other secular people was 'stunned' to hear about his attending the RSS function.

'I personally think that a person of your stature, being secular and in politics for decades, having served in various capacity including the highest position of Rashtrapati, visiting Sangh Parivar at this point in time before Parliament elections is not proper.

'Congressmen besides secular people are stunned to hear the news and are agitated on the situation and are hopeful that yourself will reconsider the idea.

'I once again request you to reconsider and avoid visiting Sangh Parivar in the interest of secularism and the country,' Shareif said in his letter which was also signed by former MP H Hanumanthappa.

"No comments," was Congress spokesperson Tom Vadakkan's response when asked about Mukherjee visiting the RSS headquarters.

He said since the event is yet to happen he would not comment on it and the Congress will formulate its thoughts once the event takes place.

"The event has not happened. I have come to know about it from media reports and am collecting further details. At present I have no comments to offer till the event takes place," he told reporters at the All India Congress Committee office.

Former MP and Delhi Congress leader Sandeep Dikshit said as a Congress leader and minister, Mukherjee has spoken about the RSS and the Bharatiya Janata Party many times on various issues and dubbed it as 'bad' and 'worst' outfit, which is 'communal' and 'anti-national'.

"Pranab Mukherjee used to say that the RSS is the worst organisation in the country. Its leaders have no morals and RSS is corrupt and spreads lies. He (Mukherjee) has also said that the RSS is anti-national, unpatriotic and communal.

"If the RSS has invited a person with such views, does this mean that the RSS admits that his (Pranab's) views about the organisation were correct," Dikshit asked.

Earlier, at a press conference in Mumbai, Gadkari said, "The RSS is not Pakistan's ISI. The RSS is an organisation of nationalists."

"Mukherjee's acceptance of the invitation is a good start. Political untouchability is not good," he said.

Amid the raging debate over Mukherjee's address at the RSS event, the RSS said the likes of Mahatama Gandhi and Jaiprakash Narayan have attended its functions in the past.

RSS joint spokesperson Narinder Thakur in a statement said that even former Prime Minister Jawaharlal Nehru had also invited its workers for the republic day parade in 1963, as he was impressed by their work.

Vadakkan said there is a lot of difference between their ideology and that of the RSS and never shall there be any compromise on that.

Asked about the RSS statement that even Mahatma Gandhi has attended the Sangh headquarters, the Congress leader said 'everyone knows about the specialisation of the RSS and the BJP on history. I would not comment on it'.

Mukherjee, who has been a Congress veteran, has been invited to be the chief guest at the valedictory function of Sangh Shiksha Varg -- a training camp for the Rashtriya Swayamsevak Sangh volunteers -- at the RSS headquarters in Nagpur, scheduled on June 7.

The former president has accepted the invitation, an RSS functionary said on Monday.