What the BJP-RSS's own exit poll says

'This survey, done on the basis of feedback from BJP-RSS workers at the booth level, has given Narendra Modi the confidence to start packing his bags in Gandhinagar. on Tuesday, he has done photo shoots with his colleagues and staff.'

Sheela Bhatt/Rediff.com presents the Sangh Parivar's assessment of how many seats the BJP will win in this election.

Jairam Ramesh has started putting up a defence of Rahul Gandhi.

He says the Congress could fight the Bharatiya Janata Party, but not any individual.

He complains that this election was not fought on any issue or ideology.

The fact is, it is too late for anyone to lend an ear to such arguments. What one can hear loud and clear is that the Congress is staring at a defeat, and that too a disgraceful defeat.

Some 551.3 million Indians voted in this election. The Bharatiya Janata Party will have to thank its voters who are likely to be in the region of 150 million.

Along with voters, Modi will have to profusely thank his mentor institution, the Rashtriya Swayamsevak Sangh, for its impressive march in this election.

During the election campaign those who have seen, first hand, the RSS cadres' efforts to motivate voters to go out and vote claim that on a scale of 10 the RSS will get six marks for its unprecedented hard work in villages and towns to inspire voters to vote for Narendra Modi.

The BJP-RSS have prepared their own exit poll with the help of their cadres, and while Rediff.com does not set great store by opinion polls and exit polls, believing that it is best to await the actual election results on May 16, we present some important statistics from the BJP-RSS report for the sake of political animals who may be interested in reading about it.

According to this estimate the following is the maximum number of seats the BJP is likely to win.

This takes the BJP tally to 226 seats. Those states missing on the list are the ones where the BJP doesn't expect to win any seats.

The BJP-RSS's assessment is that the Telugu Desam Party will win eight seats, the Shiv Sena around 10 to 12 seats and Akali Dal will get five seats.

In addition, in Tamil Nadu, UP, north-eastern states and in Bihar, the BJP's allies will get around 10 more seats. This will take the NDA tally to 259 seats.

This survey, done on the basis of feedback from BJP-RSS workers at the booth level, has given Narendra Modi the confidence to start packing his bags in Gandhinagar. on Tuesday, he has done photo shoots with his colleagues and staff.

Modi came to Gandhinagar unexpectedly. He became the chief minister without even fighting an election. And today he has become the most powerful leader in the Sangh Parivar because he is capable of winning election after election.

The Sangh's winning star has become so powerful that he will decide who should carry on his legacy in Gujarat once he shifts to New Delhi.

His authority is so enormous that he can make even an inconsequential Gujarati the chief minister of his state.

And it is likely to happen soon.

Will the NDA get a majority on its own? Vote below! 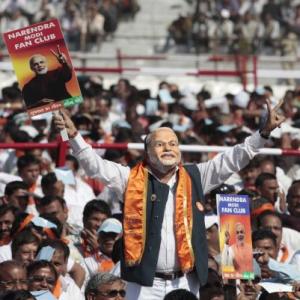 'There is a Modi wave in India' 5 states that matter the most to Modi